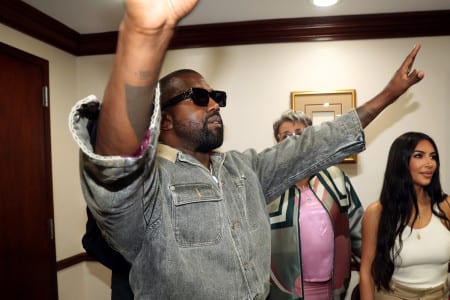 Surprise guests during live performances are no new thing, but rarely do certified legends just show up on stage and take over an entire crowd. During his headlining set at Rolling Loud California this past weekend, Future brought out no other than Kanye West.

Surely concert goers were not expecting Ye to make a surprise appearance during Rolling Loud, let alone during Future’s set. The two don’t necessarily have a long history of collaborations like Future and Drake have. But during his set, Future stopped the music and “Can’t Tell Me Nothing” started to play.

Ye went on to perform “Father Stretch My Hands Pt. 1” and freestyle over Future’s “Fuck Up Some Commas.”

Ye might’ve thought that dancing on stage to Drake, Future, and Young Thug’s “Way 2 Sexy” would show the crowd that he and Drake have truly made amends.

Ye has been no stranger to surprises this last year. His whole Donda rollout came out of left field much like him and Drake squashing their beef. Last Thursday Ye and Drizzy hosted the “Free Larry Hoover Benefit Concert” at the Los Angeles Memorial Coliseum to bring awareness to Larry Hoover’s fight for freedom. The two shared the stage with Ye again surprising concert goers by playing songs all the way from The College Dropout, to his latest effort, Donda.

We wonder what Ye has up his sleeve next.