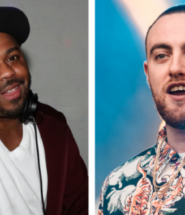 At just 19 years of age, Mac Miller was given the opportunity to link up with iconic JAY-Z and Eminem collaborator Just Blaze, which resulted in the song “All Around the World.” For the 10-year anniversary of his Best Day Ever mixtape last month, Blaze caught up with the Recording Academy and talked about his relationship with Miller from the moment they first met.

“A friend of mine, Alex, we called him The Bald God, was helping me find young talent to work with,” he explained. “Mac was on the list. Whenever he was in New York, he’d come to the studio, hang out and record. No real serious business arrangement. Let him rock and see what happens.”

“He understood, ‘This is the foundation that what I’m doing is built on.’ I think part of the reason why I have been able to be successful is because I understood that foundation. He reminded me of myself in that way. Some people are like, ‘That was before, this is what we’re doing now.’ The fact that he was so knowledgeable about what came before him, I admired that and I respected that.”

Just Blaze then went into detail about the making of “All Around the World,” between the sample and putting it together in a new environment.

“He used to just send me songs to get an opinion,” he said. “With ‘All Around The World,’ he had already cut a demo. I was just finishing my new studio. That song contained a sample of ‘Heartbreaker’ by MSTRKRFT. Jesse [Keeler] and Al-P of MSTRKRFT were old friends of mine. I was like, ‘I can get you the stems to this record and make it into something.’ They sent me files to the original version. We added the actual stems from the original sample and got it done. It wasn’t a big thing. To be honest, I had just finished my new mix room and I was trying to test out the room and figure out what we needed to fix or change.”

As it turns out, Just Blaze didn’t charge a single dollar for the beat — he was just happy to help out a rising artist he believed in.

“That record, and a few other records [at the time], I didn’t charge anything for,” he revealed. “I was really just trying to test the room. I was able to help a few artists with their careers or help them get their start. I was happy to be a part of that with him. Again, we never had a formal business arrangement. Sometimes it’s just an artist you believe in and you try to support them however you can.”

He added, “Time flies. When I thought about it, I was like, ‘Damn.’ It’s hard to believe it’s been 10 years. And it’s harder to believe it’s been as many years as it has been since he’s been gone. To be honest, a lot of times when you’re making history, you’re not thinking about the fact that you’re making history when you’re doing it. You’re too busy being in the middle of it.”

In May 2011, Mac Miller spoke to HipHopDX about working with Just Blaze and sharing stories over a couple of sessions.

“The thing with Just was, a while ago, I came out to New York and Artie [from Rostrum Records] told me, ‘Just Blaze wants you to come to the studio,’” he said at the time. “And I was like, ‘OK! Let’s go.’ I got there, just kicking it, not expecting to make any music – which we did. I just stayed there all night until like 9 in the morning. We talked a lot about music and our ideas and business with music, and his past and stories from him and stories from me and stuff.”

He continued, “I came back a second time, and we started kicking it again. This time, I was like, ‘Just, I need some beats!’ He was like, ‘Alright.’ He gave me this one beat that was this Hip Hop ass beat and this other joint that was for house music. I was like, that’s tight, let me use that.”

Revisit “All Around the World” above.