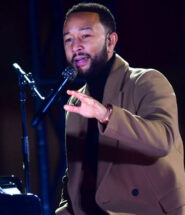 While addressing the crowd, Legend criticized the current president. “Now, some people see the meanness, the bullying, the selfishness of Donald Trump and they mistake it for strength, a kind of twisted masculinity,” said Legend, who was joined by his wife Chrissy Teigen and their two children. “Some see his greed and they mistake it for being good at business.”

He also took aim at rappers who have endorsed Trump in recent weeks, including Lil Wayne, 50 Cent, and Lil Pump. “Some of your former favorite rappers have been taken in by these lies. I think they even founded a new supergroup, it’s called the Sunken Place,” he said, referencing Jordan Peele’s 2017 movie Get Out.

Both Wayne and Ice Cube met with the Trump administration to discuss the Platinum Plan, which promises to increase access to capital in Black communities by almost $500 billion over the next four years.

“But Trump’s Platinum Plan for Black folks is nothing but fool’s gold, because you can’t bank on a word he says,” warned Legend, who continued to slam Trump.

“Ask the students of Trump University. Ask all of the contractors he stiffed. Ask the people his charity was supposed to help before it was shut down for being a fraud. Ask all the Black and Brown Americans who are dying from this virus and losing their jobs under his watch. The president isn’t strong. He’s a coward. And his career in business and in government has been failure after failure after failure.”

Legend performed “Glory” with Common at Monday’s rally, while Lady Gaga was campaigning for Biden in Pittsburgh. Meanwhile, Lil Pump was welcomed onstage by President Trump at his rally in Michigan.