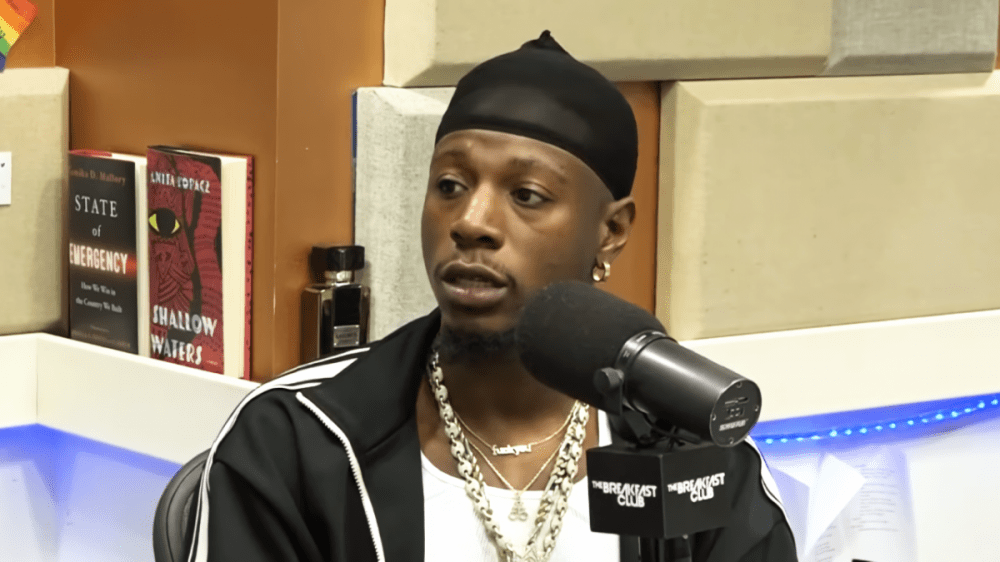 Joey Bada$$ credits therapy for helping him grow as a person and expand his emotional intelligence.

During a trip to The Breakfast Club on Thursday (August 18), the Brooklyn native opened up about his experience with therapy and the positive impact it has had on his life — including bringing him a “stillness” that he previously never knew.

“I started going to therapy back in 2020,” he said. “For me, I needed that shit. I didn’t know stillness in my adult life. I hit the ground running at 17 years old, I was still a kid, still in high school and was forced on an accelerated growth.

“I didn’t realize for about five, six years, I didn’t stop. I hadn’t got any type of still time. I hadn’t had real time to connect with my family — even more importantly, myself. So when I finally got that space and that time, I just went real deep inside and I realized things that I needed.”

He added: “I need to be held accountable for my shortcomings. I need those to be pointed out to me, because I’m what you call a self-improvement junkie. I’m committed and devoted to being a better version of myself every time I show up.

“Therapy was definitely an outlet that I saw to bring me closer to a higher self-awareness and state of being.”

Joey went on to explain how therapy has helped him develop a higher “emotional intelligence” and taught him how to better deal with the “anger issues” he had growing up, which stemmed from his parents’ divorce.

“I’ve always being open-minded and I started to resonate with the idea of therapy being so taboo to [Black people],” he continued. “I was introduced to the concept of emotional intelligence and that kinda blew my mind. That opened up so many doors for me ’cause I’m like, ‘Wow, we really wasn’t taught how important it is to identify your own emotions in relation to the people around you.’

“Shit, we might just wake up in a bad mood and now your household is feeling that mood and you don’t even realize you just passed that mood onto your son… Energy is so contagious and once I realized that, it started to open up little pathways in my brain.”

He added: “[Growing up], I had anger issues and stuff like that. It was hard for me to identify a lot of things I was feeling … I think a lot of it came from when my parents split and me not knowing how to process that and it manifesting into something else.”

Joey Bada$$ previously touched on therapy in an interview with XXL in May, revealing his role in Oscar-winning short film Two Distant Strangers inspired him to seek professional help.

“I’m not gon’ lie, I had to do therapy after I shot Two Distant Strangers because it was a lot of internalization,” he said. “I remember the first scene in the movie, when I’m coming out of the girl’s apartment and police see me and they slam me on the floor.

“I remember shooting that in real time and it was people driving by, they would stop, and they would roll down their window and they’d be like, ‘Yo, is this real? Or is this for a movie? What’s going on? You good?’ It’s traumatic for these innocent bystanders as well.”