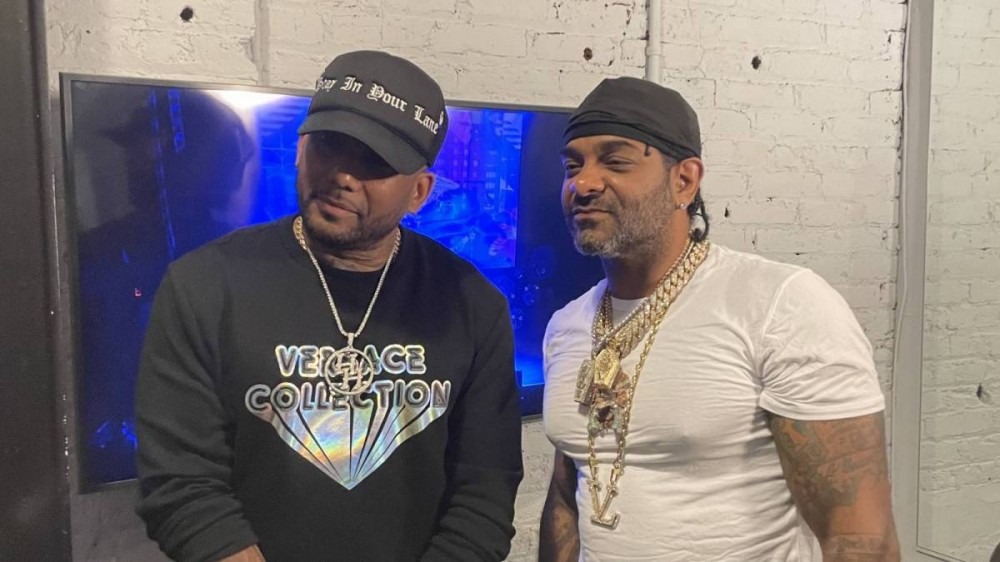 New York, New York – It looks like New York rap stars Jim Jones and Maino are about to be very busy in the next few months. Last week the duo made a surprise announcement that they would be joining forces to form a new pair called Lobby Boyz, and they have a collaborative self-titled album on the way.

Both Capo and Maino are seasoned rap veterans who’ve seen all the Hip Hop game has to offer them, so there’s no need for them to pair up at this stage of their careers. However, teaming up has been something Jones and Maino have wanted to get done for quite some time. According to the Lobby Boyz, their union makes more sense now than it has ever done in the past.

“It’s been a long time in the making,” Maino told HipHopDX backstage at an NFT event in New York City. “We’ve been talking about this for years, but you know how it is in life. You don’t always do or get what you want on time, but everything happens when it’s supposed to. There’s no better time than the present right now.”

The Lobby Boyz are the epitome of what New York street life entails—countless hours of hustling, maneuvering through the dangers of the hood and having communal gatherings inside project lobbies. They may be successful and celebrities in their own right, but Jim Jones and Maino still have a finger on the pulse of the streets of New York.

“I think as far as New York is concerned, we’ve never seen anything like this,” Maino continued. “People have to understand New York is different. We got Brooklyn and Harlem that have different cultures, but at the end of the day, we all come from the streets, the corners, the project lobbies, the buildings, we all adapt to the same pain.”

Capo added, “If you know the history, then you know this is what happens when two substantial people bump into each other on real terms. The relationship that evolved from that is even doper, so our relationship means way more to me than this album, but the way that this album came about is dope.”

The Lobby Boyz were born after Diddy and Rick Ross teamed up and called themselves the Bugatti Boyz in 2010. Jones and Maino felt not everyone could relate to the lavish and expensive lifestyle of a Bugatti Boy, so why not create something that the average person can enjoy.

“We said we were the Lobby Boyz, and we have a bunch of records that we did before we even started this album,” Jones told HipHopDX. “To sit there and consciously adapt to this project was dope. The process was dope, the music is crazy, and people will be very surprised at how fire this shit is.”

Maino hasn’t been as active as he once was on the music scene, opting to build his business empire, while Jones has seen a resurgence in the second half of his music career. If anyone is wondering what these two would sound like on their new album, take a listen to their collaborative effort on Jim Jones’ El Capo album titled “My Era.”

“People aren’t going to understand they needed this in their life for real,” Jones added. “I didn’t know I needed it in my life, and by the time I realized that this shit was so high, it was already too late. We had like five or six records already done, and I was telling Maino this shit is going a little bit different than what I thought it was. I’m definitely excited for this.”

The Lobby Boyz also announced they’ll be kicking off a special competition amongst up-and-coming producers for the album. In partnership with record sampling store, Tracklib, the Lobby Boyz will offer one lucky creative placement and standard writing credits and publishing on the new album.

Jones and Maino are also looking to turn the Lobby Boyz’s first album into a non-fungible token, one of the first of its kind. The music industry is still trying to find its footing with NFT’s but Capo and Maino aren’t willing to wait and see what happens.

“We’re going to try and turn this whole album into an NFT with my man Lawrence Adams of Legend NFTs, we’ll see how that goes I have a couple of meetings with him,” Jones said. “Besides that, there are a couple of record labels that are reaching out to be a part of this. Labels better get on quick because we about to push the button ourselves, we don’t really need too much. If you want to get next to this hotness, you better come catch these sunrays.”