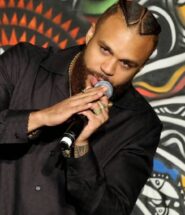 Jidenna has been laying relatively low lately but recently popped up with tweet that set Twitter ablaze. On Tuesday (May 18), the 36-year-old rapper/singer became a trending topic after he shared a pair of photos of himself to the social media platform that immediately drew comparisons to Jason Momoa’s character in the DC Comics film Aquaman.

Rocking long curly hair, a large tribal tattoo on his left arm and henna on his hand, Jidenna appeared slightly more muscular than in the past, leading plenty of women (and yes, some men) to comment on his physique.

I don’t know where the stars is at but I know where I’m at. pic.twitter.com/3tYjIqE3hi

But that was just the beginning. Countless women were practically drooling over the photos and wrote things such as, “Everyone is ready to risk it all for Jidenna right now. It’s me. I’m everyone” and “How Jidenna keep reinventing himself into a finer man?” One woman even took a step further and wrote, “Can we discuss you relocating to this p-ssy?”

Jidenna, who’s signed to Janelle Monáe’s Wondaland records, earned a nomination in the Best Rap/Sung Collaboration category at the 58th Grammy Awards for his song “Classic Man.” He released his latest album 85 To Africa in 2019.

In February 2020, Jidenna participated in 2020 NBA Celebrity All-Star Game at the Wintrust Arena in Chicago but other than that, it appears he’s been focusing on his fitness.

I promise one of them is actually Jidenna and 🤣🤣 pic.twitter.com/BPU9WlSnIC

Jidenna could really get the business .. like all of it… pic.twitter.com/8NoGdlSSqi

Everyone is ready to risk it all for Jidenna right now.

It’s me. I’m everyone. pic.twitter.com/rcmm27CADD

How Jidenna keep reinventing himself into a finer man? https://t.co/AO8sY4zhhq

Thought this was Jidenna Mamoa for a hot second lol 😭 https://t.co/wiTOAq45AE

The female’s on TL: pic.twitter.com/FlZeiZWuOv

Can I just play in your hair tho pic.twitter.com/LaZWgJTyXU