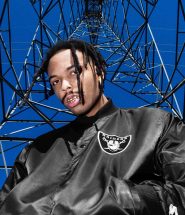 On his sunny-yet-macabre song “Clear Bones,” Los Angeles-based artist Jean Dawson pleads with death. “Mr. Reaper, will you wait on me?” he sings, asking to have a bit more time. It’s a genuine request, and Dawson has reason to ask it.

On a recent call with MTV News, the 24-year-old Dawson mentions a time in his past — “breaking shit, burning shit” — when he lived more carelessly. “A lot of it is fun and games, and you don’t realize, oh shit, I could die,” he said. “Like, yo, I’ve done a lot of shit where I could have been killed, and I haven’t yet. So it’s probably time where I become way more cognizant of the stuff that I’m doing, or I’m going to end up meeting Mr. Reaper.” This may explain certain aspects of the song’s music video, like the pixelated dirt that obscures his body and, eventually, the giant pole through his chest. “Me thinking about my own mortality, or coming into grips with my own mortality, is [me] growing up.”

Dawson’s grown now — he came of age between Southern California and Mexico, crossing the border for school — and he keeps growing. His 2019 mixtape Bad Sports showcased a knack for using his own music as a mirror for how he himself filters the experiences of the world, both online and IRL. Songs called “Napster,” “Ssick Girl Online,” and “90’s Green Screen” sounded watery and hypnagogic, nostalgic for the memories the internet preserves in amorphous digital amber.

“I was never the popular kid in school. I was the kid in the library with one friend. And we’d sit, we’d talk every day about the internet and what we saw on the internet,” Dawson said. “And I think it was super important for me to realize that that was OK.” He’s spent 2020 exploring new sonic spaces, moving into peppier, more melodic territory, like on “Clear Bones.” But, as its ghoulish words reveal, the edge remains.

Part of the job of all contemporary rising artists is being a multi-hyphenate, with careful considerations given to both image and sound. The more sub-genres the music touches, the bigger the buzz: A “bedroom-pop” artist can cut a TikTok single in a thousand-dollar studio, and another might spew Auto-Tune over shoegaze or tag an uploaded song “alt-tronica.”

In this landscape, Dawson truly is an outlier, not because his songs are patently defined (they’re not) or because his look is easily summarized (it’s not). Dawson knows who he is, even as he exists as many elements at once. He’s the rare visionary who sounds as comfortable lost in 2010s SoundCloud reverb as he looks dangling from a basketball hoop in a Sonic Youth tee. Or munching on fruit to kick off his daily routine.

“Oat milk in the morning, banana, get the day right, and then like 30 minutes of holding my puppy,” he said. “That’s pretty much how the morning starts.” Below, the as-yet unsigned Dawson talked us through the rest of his routines — making his upcoming debut album Pixel Bath, sustaining a creative relationship with A$AP Rocky, and why he treasures CDs in a digital age.

MTV News: Now that I know your morning routine, do you have a similarly rigid approach when it comes to making music? Or is it a little bit more free-form?

Jean Dawson: Oh no, it’s way more free-form. Well, I guess it’d be a little bit of both because I’m very — not strict. Strict would be the wrong word, but I guess poignant on what I want to do and how I want to do it. Since I don’t believe in a necessary set of rules of how to do something, I think it lends itself to be more like an experimental process. Whereas if I’m doing something that’s very formulaic, or if I’m writing a record for somebody else, I’m like, “This is pop record, so we need to make sure that the [beats per minute] is this.” But when it comes to what I’m doing for myself, it’s like, not trial and error, but trial and trial. I’ll keep trying until something sticks. More than one thing will fit, but it’s just finding that perfect mesh of what I want to fit.

MTV News: For “Clear Bones,” one of the things that’s most apparent is the melody being really strong and central to it. Is that where that song started, or did it start with a sound, and then you explored from there?

Dawson: It’s going to sound really weird, but it all starts at the same time, almost like if it was made live. So if I was having a jam session in the garage, I will bring up a mood or something I’ve been feeling, with the quote-unquote “band,” which would be the producers and myself, and we just start fucking around with the idea of things. For that song, specifically, I was like, “What would it feel like to make a very morbidly happy Weezer record?” And obviously it’s not a Weezer record. There’s a whole lot of things that could’ve made it a Weezer record. But the intention was, how do you make something that feels like Bubble Boy running away from the Grim Reaper? It’s more like, let’s play around until we figure out something that we like so much, that we like hearing. Then let’s perfect that.

MTV News: In the video, you’re literally shown with pixelated dirt on you and you literally have a pole sticking out of your chest. Is that something you think about, your own mortality?

Dawson: I bullet-point a lot of things in my life. So I think I have this thing where, when I don’t want to think about anything anymore, I’ll write it down in my phone, and then I’ll talk about it in records, so I can really not think about it anymore. And that record, specifically, I wrote in my phone, “Death is just before you were born, so don’t worry about it.” And that’s the premise of why I wanted to do that record in the first place.

MTV News: There are a lot of interesting things, visually, that happen in that video. The big one is of a scenic vista, and you’re alone, hitting this punching bag. It’s striking because of the contrast between how far it’s zoomed out and how much of the world you can actually see. Where did that visual idea come from?

Dawson: I box maybe five, six times a week. I spar and do a bunch of boxing things. For a long time, I always thought it’d be so cool to have a boxing bag outside — if I owned a farm — just in the middle of nothingness, because when you’re boxing, the only person that you’re truly fighting is yourself. That, at least from my perspective, is boxing for me. You’re fighting your tiredness, your fatigue, you’re testing your endurance, you’re letting out aggression. So you get tunnel vision. If I wasn’t making music, I definitely would have tried to be a professional boxer.

But I guess the idea came from that sense of isolation when you’re around so many people, because when you’re in a boxing gym, or you’re in a gym in general with a bag, everybody’s around. When I’m fighting the idea of death itself, it’s in this scenic thing, because in the video, you don’t realize that I’m not aware of where I’m at. It’s not for me to view. It’s for everybody else to see.

MTV News: Where does that feeling come from for you, the outsider element?

Dawson: I’d try to go do these things or, in college, I’d try to go to a college party. Everybody seemed drunk and I don’t drink. Everybody’s smoking and I don’t smoke. And I’m just standing there like, who am I going to have a conversation with? And then I realized that I don’t have to do any of that stuff and I’d be perfectly fine. And that’s when I realized that I can be a whole ass man, watch TV, and build model figures of Japanese robots and be perfectly fine. Everything that you do is in yourself. I guess it’s like, amplify the weird shit that you do and be OK with you being not the same as everybody else. And even if you are the same as everybody else, remember to highlight your identity and know that your identity isn’t based off other people’s identities.

MTV News: You announced your forthcoming album will be called Pixel Bath. What was the center that you were trying to work toward for all those songs?

Dawson: I want it to be controlled chaos. I just want it to feel like you’re in multiple places at the same exact time. People talk about, if you could have any superpower, what would you want to do? I would want to teleport. It’s like that. I want you to feel like you’re at a rave, but onstage, it’s fucking Rick Ross. Rick Ross at a ’90s rave with the lights to beat, everything. Or I want it to feel like the Pixies, but the Pixies are at the most trapped-out environment that the Pixies can be at. I’m very, very, very, very protective of my babies, which are [the records I made]. Right now, the only people that have the records are Danielle, my publicist, and Rick Rubin.

Dawson: Well, he’s going to be somewhat involved in my future. Let’s say that.

MTV News: I know you and A$AP Rocky have a good relationship. When you’re able to get into that kind of position where you can get tight with somebody that you’ve looked up to, what’s that relationship like and what do you learn from somebody like that?

Dawson: For one, the man is a genius, and I don’t use that word lightly. And I don’t use it to describe many people. But he’s a genius in the way that he thinks in terms of the all-encompassing, of being an artist and everything that it comes with. So from being at his home, you can see that it’s a museum. Spent a lot of time at his home, and the best thing that he told me is, “Don’t lose your heart.” And that shit stuck with me, because I’m a fucking — he called me, he’s like, “You’re a weirdo. But that’s tight.” And I tell him, like, OK, all right, that’s fine, whatever. But the one thing I did learn from him is that for me to follow my instincts and to continue to do the things that I’m doing without second-guessing myself for other people.

MTV News: I saw you saying that you’re buying a lot of CDs now out of fear that the streaming services might spontaneously combust. What have you bought recently?

Dawson: I don’t even know if this is official, but I got the soundtrack to [1995’s] Kids. I just ordered Goo by Sonic Youth. And I ordered Venus as a Boy by Björk. I’ve actually been waiting at my mailbox for my stuff because I’m not trying to get my shit jacked. I [already] I have [N.E.R.D.’S] In Search Of…, [Kanye West’s] My Beautiful Dark Twisted Fantasy — in case Kanye goes, fucking, “I’m president, I’m taking all of my music off streaming services,” or crazy shit like that. I would obviously illegally download it, and I don’t care, you can know that.

MTV News: Do you have a stereo or a Walkman?

Dawson: So just like a CD player, a JVC CD player. Just any one. I want to make a new CD player. I’ll probably try to design one or something.