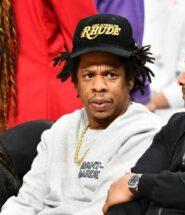 JAY-Z became a trending Twitter topic on Thursday (April 1) after a tracklist for a mythical album called Ascension started making the rounds. Considering it’s April Fool’s Day, people were quick to chalk up the potential album up to another well-timed prank. After all, JAY-Z, Roc Nation, Beyoncé nor anyone else associated with the Hip Hop mogul has confirmed any such project exists.

The rumor appears to have originated from Hov’s African fans who have a very ambitious album planned for the Grammy Award-winning rapper. The purported tracklist features 16 songs and guest contributions from H.E.R., Beyoncé, Rick Ross and several of the most prominent artists in Africa, including Femi Kuti, Olamide and Nasty C.

#JayZ coming out with his #Ascension album 💿 featuring all the top rappers in Africa…
•Sarkodie
•Olamide
•NastyC
•Femi Kuti pic.twitter.com/xfSqQkpa2D

News outlets in the United States haven’t picked up the story, but a couple of African sites have.

NotJustOK went as far to report Ascension will only be exclusively available via TIDAL in its opening week and include an alleged statement from JAY-Z that reads: “I’ve always wanted to get in touch with my roots and connect to the motherland. You know, Africa is blessed with so much talent and I felt like it was time to tap into that resource.

“The Ascension is not just talking or focusing on Africa but it’s also about me giving back to the people, familiarizing with the culture and connecting more with the motherland.”

But they cleverly added at the end, “Happy April Fool’s Day.”

So yes, for now it doesn’t look like there’s a new JAY-Z album on the horizon.

April Fool’s & we starting the day with a fake Jay-Z album tracklist?!?! pic.twitter.com/qFZXcfv55w

if you’re gonna make up a Jay-Z album called Ascension for April Fools’ Day, clearly you should go all the way and say that Hov learned sax and covered Coltrane

Jay-Z to feature Sarkodie on his Ascension Album !!!

Why would Jay-Z name his album “Ascension”? 😅 why would Jay-Z leak such a bootleg version of his upcoming album ? Ahh these bloggers would bleed today 😂

Imagine if the Jay-Z Ascension album starts off being an April Fools joke, which turns out to be real that would be epic and crazy good marketing.

y’all realllly think jay-z cover art would be THIS ass? 💀

Jay-Z is not naming an album Ascension for starters. Let’s be serious

If you’re a Jay-Z fan then you should know that Jigga will never name his album “Ascension”.

I’m willing to bet good money that, that so-called album does not exist.

It’s April’s Fool and if you doubt, put your money up.