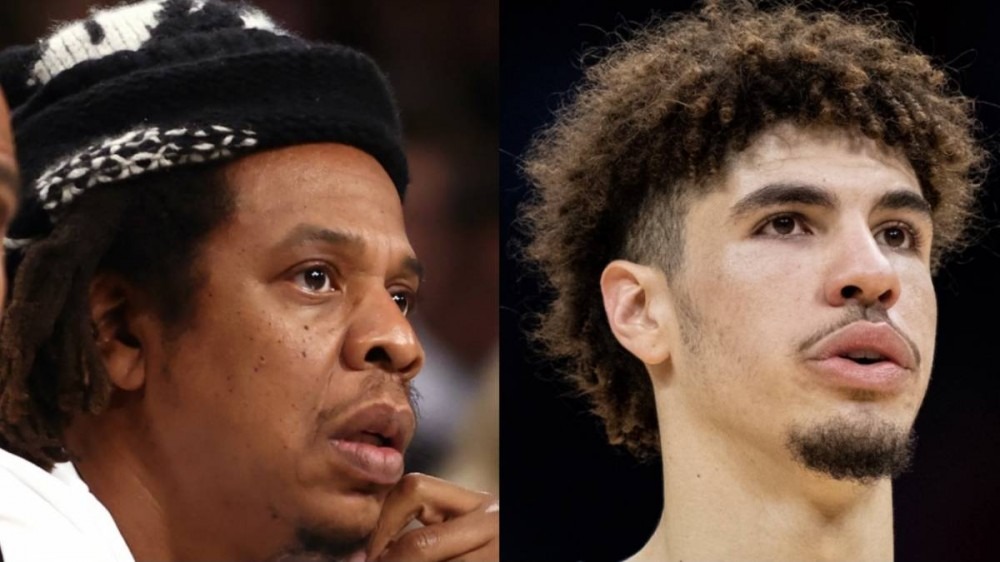 Brooklyn, NY – JAY-Z has always been a frequent visitor to the Barclays Center whenever the NBA’s Brooklyn Nets are back home, and he sat courtside to take in some basketball action on Sunday (October 24).

The Nets were taking on LaMelo Ball and the Charlotte Hornets when JAY-Z sparked a conversation with the reigning NBA Rookie of the Year during the halftime interval. The chat looked interesting judging by Hov’s reactions, which led fans to wondering what the two were talking about on the sidelines.

The conversation could’ve been about anything, especially with LaMelo being signed to Roc Nation Sports and Puma as one of their athletes. However, that wasn’t enough to keep people from speculating about the juicy details of their conversation.

“‘Beyoncé has a niece I can hook you up with’,” one person joked under SayCheeseTV’s Instagram post of the court side meet-up, while another wrote, “He asking when is he getting them BBB shoes he payed for.”

Another fan suggested Hov asked LaMelo about the neon green outfit he wore on opening night of the NBA season: “N-gga said wtf was you wearing the other day.”

Aside from adding the Hornets star to his Puma Hoops family, JAY-Z teamed up with LaMelo Ball last month to offer a four-year scholarship to a student majoring in Sports Management or Sports Communication & Marketing at his Roc Nation School of Music, Sports and Entertainment at Long Island University.

Away from the Barclays Center, JAY-Z is still managing to get some time in at the studio. The Roc Nation boss reunited with Kid Cudi on “My Guns Go Bang,” taken from the soundtrack to the upcoming Netflix movie The Harder They Fall. He also has a song with Jadakiss and Conway The Machine called “King Kong Riddim.”

The soundtrack is due out Friday (October 29) while the movie itself, which JAY-Z co-produced, is set to premiere on Netflix on November 3. It stars Idris Elba, Jonathan Majors, Regina King and more.