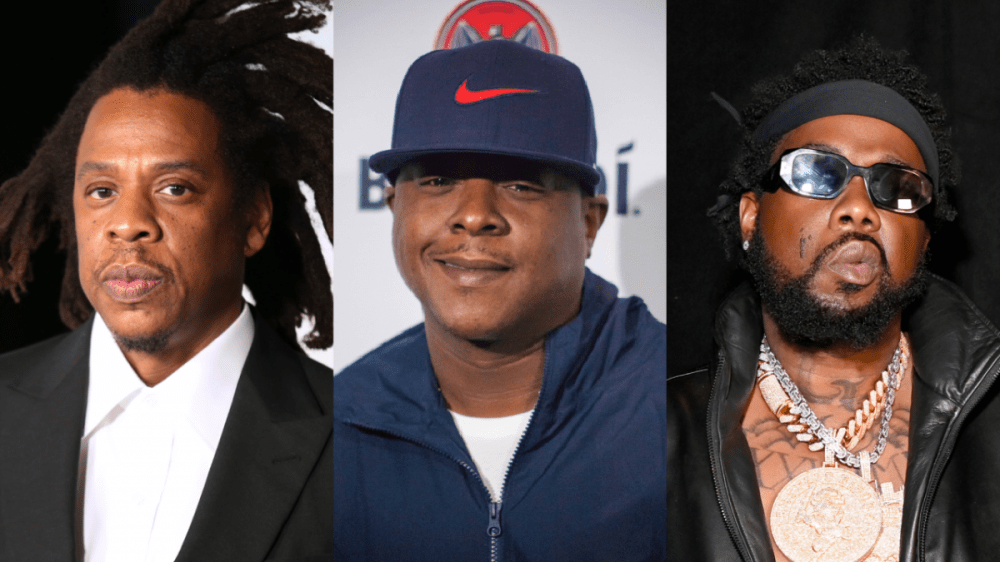 While a new JAY-Z project doesn’t appear to be anywhere on the horizon, rap fans can still look forward to new material from the Marcy Projects mogul as part of the upcoming Netflix movie, The Harder They Fall, which he co-produced.

As heard in last month’s trailer for the star-studded Western, Hov joined forces with Kid Cudi for a new track called “My Guns Go Bang,” marking the “Always Home” collaborators’ first song together since 2011’s Watch The Throne.

But Cudi isn’t the only old friend JAY-Z has reunited with. In a new interview with GQ, the film’s director, Jeymes Samuel, revealed The Harder They Fall soundtrack also features a new song from JAY-Z and Jadakiss.

“[There are] two original [JAY-Z songs],” he said. “Wait until you hear ‘King Kong Rhythm.’ It’s the hardest joint. Let’s put it this way — I’ve reunited Jadakiss and JAY-Z.”

#TheHarderTheyFall director Jeymes Samuel on Black cowboys, working with Jay-Z, and the audacity of swag https://t.co/AhkVbhMvn0

Samuel also revealed the track was recorded this past summer during Jadakiss’ resurgent run after leading The LOX to victory over Dipset in their Verzuz battle at New York City’s Madison Square Garden.

“Oh, let’s just say it was part of the insane summer,” he said. “Let’s call it serendipitous. Jay, we’ve always collaborated. We go back to collaborating with Jay Electronica. And Jay and I did The Great Gatsby together. So working with Jay is literally like breathing.”

“King Kong Riddim” also features Griselda’s Conway The Machine and rising London rapper BlackRoad Gee and will arrive along with the full The Harder They Fall soundtrack on Friday (October 29). Fans can get an early taste of the song below.

“King Kong Riddim” will mark JAY-Z and Jadakiss’ first collaboration in almost 15 years. The pair first linked up on “Reservoir Dogs” from Jay’s 1998 album Vol. 2… Hard Knock Life. But even then, the underlying tension between Jay and Jada’s respective camps was brewing.

During an interview with Genius‘ Rob Markman last year, Jadakiss revealed Styles P’s ferocious “Reservoir Dogs” verse was actually aimed at Jay — all because he wouldn’t let The LOX drop their luggage off at home before coming to the studio.

“We just flew in from a LOX show,” Kiss explained. “And we [were] like, ‘We can’t go home and drop off our luggage?’ We don’t have carry-ons, we had big shit that we had to check! So that put us on edge a little ’cause we looking at it like, if [JAY-Z] just landed, would he come to the studio with his luggage? No!

“[Styles P] was goin’ on Hov on there … Hov was like, ‘He sound like he talking about me on there!’ … People screw the silencer on and slip one in every now and then.”

Fast forward to the early 2000s and Jadakiss found himself catching subliminal shots from JAY-Z while engaged in a much more direct war of words with his Roc-A-Fella Records signee Beanie Sigel, which remains one of the most memorable rap beefs of that era.

The Yonkers and Philly natives traded blows on various mixtape freestyles, but eventually buried the hatchet. Beans later claimed the beef was never personal and Roc-A-Fella made him go at Jada in order to drum up hype for his forthcoming album.

Meanwhile, Jadakiss ended up signing with Roc-A-Fella/Def Jam in 2007 before reuniting with JAY-Z on “Who Run This” the following year. Almost a decade later, The LOX joined Hov’s Roc Nation empire, followed by Jada as a solo artist in 2018.