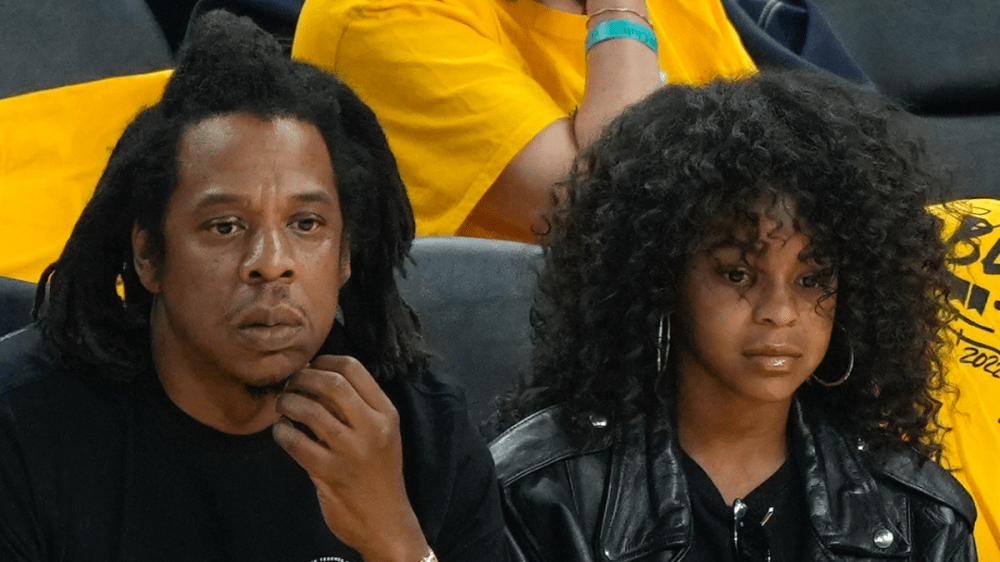 San Francisco, CA – JAY-Z returned to Chase Arena on Monday (June 13) for Game 5 of the 2022 NBA Finals between the Golden State Warriors and the Boston Celtics. This time around, he brought along his 10-year-old daughter Blue Ivy for front row seats to the Warriors’ 104-94 win to go up 3-2 in the series.

But the game didn’t pass without the cameras catching an embarrassing dad moment from JAY-Z. Hov kissed Blue Ivy on the cheek when he was introduced as a 24-time Grammy Award winner, to which she tried to stop him messing up her look: “Dad, my hair!”

During an appearance on LeBron James’ The Shop: Uninterrupted in May 2021, JAY-Z revealed he learned how to swim for Blue Ivy.

“It’s amazing,” he said about fatherhood. “It’s a very grounding thing… I didn’t learn how to swim until Blue was born. There goes everything you need to know. This is a metaphor for our relationship. If she ever fell in the water and I couldn’t get her, I couldn’t even fathom that thought. I gotta learn how to swim. That’s it. That was the beginning of our relationship.”

JAY-Z also spoke in depth with the The Sunday Times about the way he wants to bring up Blue Ivy and his two other kids, Rumi and Sir.

“Feeling loved is the most important thing a child needs, you know?” he said in April 2021. “Not, ‘Here’s this business that I’m going to hand over to you, that I’m creating for you.’ What if my child doesn’t want to be in music or sports? I have no idea, right? But as long as your child feels supported, and feels loved, I think anything is possible.”

He continued, “[The goal is to] just make sure we provide a loving environment, be very attentive to who they want to be. It’s easy for us, as human beings, to want our children to do certain things, but we have no idea. We’re just guides.”