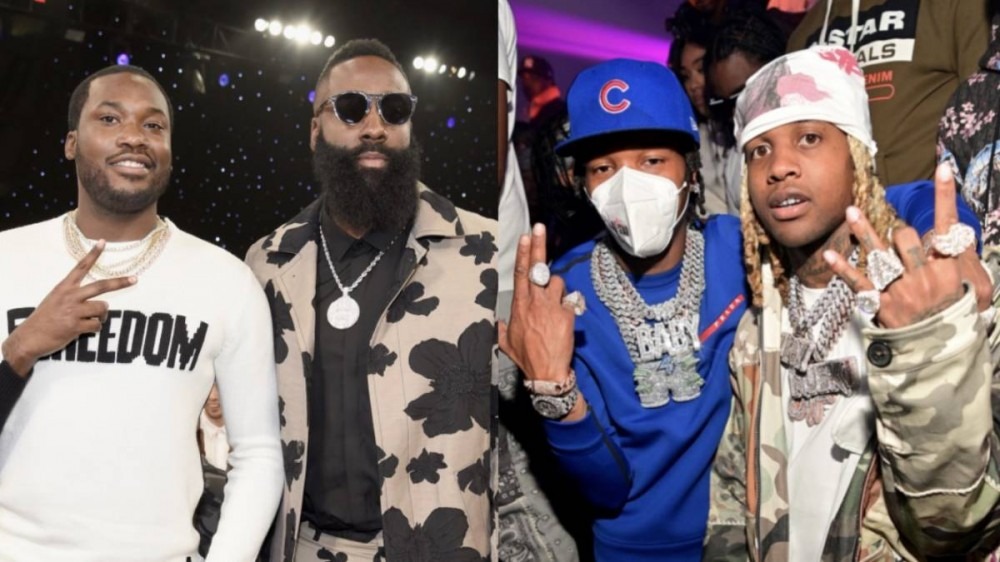 Lil Baby, Meek Mill and Lil Durk have several celebrity friends, but one person they’ve been around a lot is NBA All-Star guard James Harden. The Philadelphia 76er has been seen all over the place with each rapper, and their hangouts reached a point where he wasn’t getting sleep before basketball.

During a recent interview, James Harden spoke about the time when the three rappers called him about some new tracks they would like him to hear. It was a risky move for Harden, who had practice the next morning, but he knew he couldn’t miss out on the experience.

“They all called me like, ‘Yo, we about to pull up to Houston.’ Baby, Durk, Meek,” Harden said. “They all come to the house [from] Atlanta, like two in the morning. I gotta go to practice in the morning! They come in the studio and I’m up with them the whole time.

“And I go right from the studio at 7:30 a.m. right to practice. I can’t miss this opportunity! They in the studio, I gotta see what these dudes about to talk about.”

James Harden says he used to stay up all night in the studio with Lil Durk, Meek Mill and Lil Baby and then go straight to practice

“I can’t miss this opportunity”

It’s no secret that James Harden loves Hip Hop as he was named an executive producer on Lil Baby and Lil Durk’s joint album The Voice of the Heroes. Harden was involved with the project from the start as Baby and Durk recorded during numerous late-night occasions at his home studio in Houston.

“From the beginning, I’ve had a passion for basketball and music has always went hand and hand with it,” Harden said of his involvement in the album. “It drives me on the daily to continue to be the best at what I do, to always strive for more. I see that same passion in Lil Baby and Lil Durk and can honestly I say I’m a true fan. The initial idea was to get the two together to make a few songs. But with their work ethic and undeniable talent here we are.”

He added, “Leaving all-night studio sessions going straight to practice with the songs they made gave me a newfound motivation. The Voice and The Hero two killers at the top of their game the collaboration only seemed right. I just hope the same impact they have on me, they have on the world.”