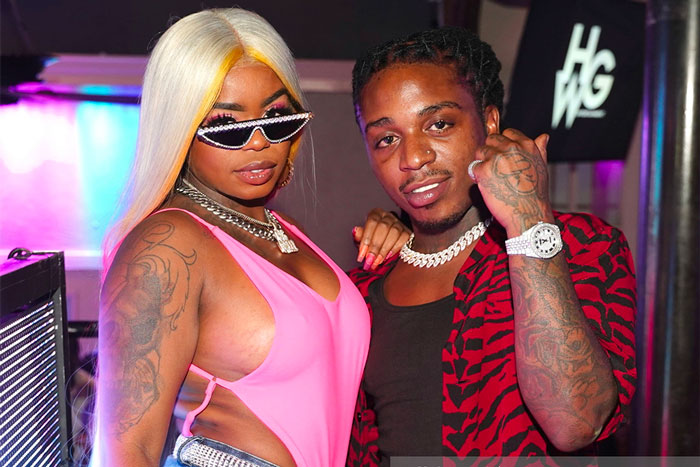 It’s over for Jacquees and Dreezy.

The couple has called it quits once again after a public showdown on social media. On Sunday, Dreezy took to Twitter to put the self-proclaimed “King of R&B” on blast while declaring her single status.

“Ni**a tryna clout chase now and KNOW I’m not wit all that shit at all. You’re blocked. I’m single. And I’m logging off. Go play wit yo ex,” she wrote, according to a screenshot from The Shade Room.

Jacquees also announced that he was single before clapping back at Dreezy. “Go play wit yo self lol,” he wrote in a since-deleted tweet.

#TSRBreakups: #Jacquees and #Dreezy say they’re both single after airing each other out on Twitter 👀 (📸: @gettyimages)

Dreezy shared her call log showing over 20 missed calls from the “Put In Work” singer. “When yu blocked so yu run to Twitter… Nobody gives af bro,” she tweeted.

When someone suggested that Jacquees’ account had been hacked, Dreezy shot back: “Ain’t nobody hack that ni**a he a hoe I’m glad y’all get to see.”

Another fan commented, “He was corny anyway,” to which Dreezy replied, “Still is. Good luck.”

But Dreezy is ready to move on. “I tried it didn’t work. Moving on…” she wrote.

I tried it didn't work. Moving on…

Their breakup came just hours after Jacquees seemingly shared a message in support of his ex. “When nobody had my back she had it,” he tweeted earlier on Sunday.

When nobody had my back she had it

The couple, who collaborated on “Love Someone,” dated on and off since meeting while on the road in 2018. “He’s more than what y’all see on the internet,” Dreezy told Rap-Up last year. “To kinda step around his world and his career and see how he handle it, I got nothing but respect for it.”

Their relationship has had its ups and downs throughout the years. In September 2019, Dreezy announced that she was single, but the couple got back together shortly after. This past March, Jacquees surprised Dreezy with gifts including a Mercedes. “You never stop surprising me @jacquees,” she wrote at the time. “You know I got yo back no matter what!”