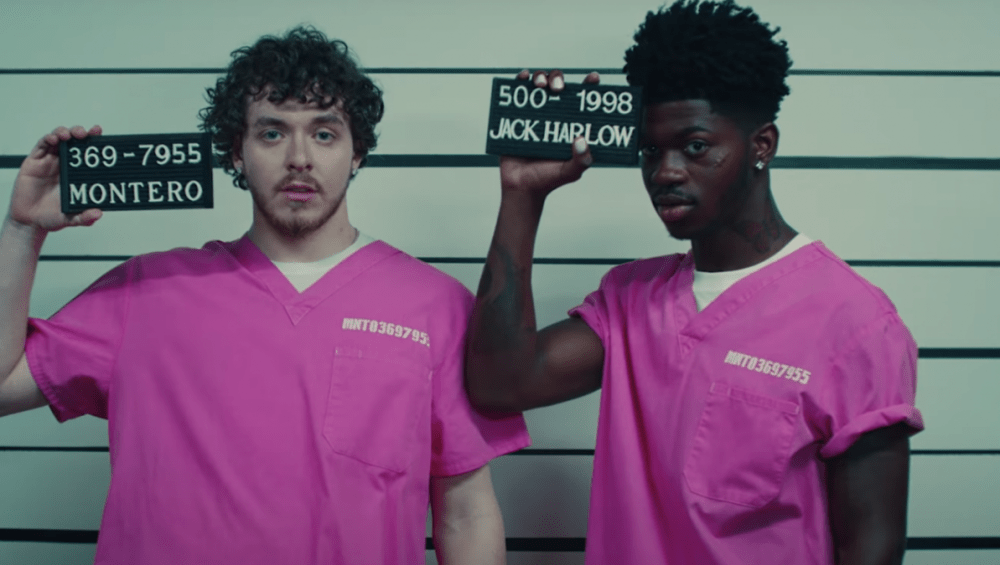 Lil Nas X triumphantly owned all gay connotations associated with his Hip Hop career through his “Industry Baby” rollout during the waning hours of Thursday (July 22).

The record serves as the follow-up to the “Satan Shoes” debacle and second single released for his upcoming debut album, Montero. Musically, the energetic number pits the “Old Town Road” rapper in the midst of the Auto-Tuned, horn-laden labyrinth of a (actually released) Kanye West beat.

Directed by Christian Breslauer, the official “Industry Baby” music video was teased with a courthouse montage on Monday (July 19) condemning — and seemingly sentencing Lil Nas X for being a homosexual.

Set in a maximum-security prison, the full-length video’s vibrant contents offer no shortage of vivid detail. As evidenced from the YouTube screengrab, the cinematic clip challenges the non-existing boundaries of sexual commerce, instead opting to use all-male nude dancers to push the gratuitous nudity.

There’s also an unpolished prison cell in spite of its shiny Grammy Awards and platinum plaques, a nod to the classic film Shawshank Redemption, electric chair electricity and more milkshakes for the boys in the yards.

Jack Harlow — whose character stands in as the heterosexual balance throughout the uncaged prison frenzy — took to Twitter as the video dominated social media and YouTube conversation, elaborating on how proud he was to be etched into “Industry Baby” lure.

Naturally, he did it in a Jack Harlow-type way.

“[Lil Nas X] wrote the whole treatment for this video and I followed his lead every step of the way,” the “Tyler Herro” rapper wrote. “If he had asked me to be in that shower scene I woulda been in that shower scene. I just let the mastermind cook. Honored to be apart of it.

He then teased his newfound collaborator with a semi-erotic black-and-white photo from the video photoshoot.

But Trollmaster Tero would have the last laugh, finding the most animated “Jack Harlow-is-in-a-gay-video” tweets and putting them on display for his six million-strong Twitter following.

to the lgbtq+ community i sincerely apologize. i have failed you. i am embarrassed. i am ashamed. and i will learn from my mistakes. https://t.co/CJH6v5c8dV

Jack Harlow waiting for his part in industry baby pic.twitter.com/iAHLXUqih2

lil nas x explaining what the industry baby video will be like to jack harlow pic.twitter.com/rOWEgMsAhQ

The release date for Montero is unconfirmed as of press time. Watch the “Industry Baby” video above as the anticipation continues to build.