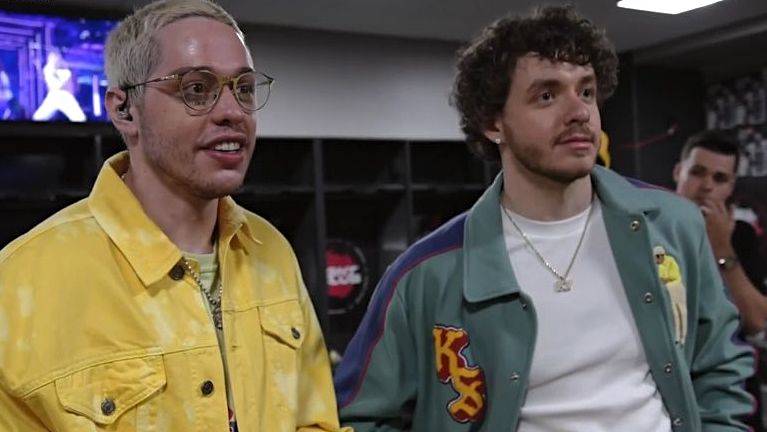 Atlanta, GA – YouTuber Jake Paul and former MMA fighter Ben Askren hopped in the Triller Fight Club ring on Saturday night (April 17), a match facing accusations of being rigged after Paul knocked Askren out in the first round. But prior to the fight, Saturday Night Live actor Pete Davidson and rapper du jour Jack Harlow paid Jake Paul a visit in the locker room, where things got a bit uncomfortable.

Among Davidson’s first questions for Paul reportedly involved the sexual allegations he faced earlier this month, although the actual question is muted in the clip circulating online (presumably for legal reasons). But Paul’s response is audible though and he says, “You can’t joke about that,” to which Davidson replies, “I’m not, I’m not. You good?”

#PeteDavidson asked #JakePaul about the sexual assault allegation in his locker room immediately before he took the ring in his fight against #BenAskren. 😱 pic.twitter.com/9tkmIjhglh

On April 9, Jake Paul was accused of sexual assault by TikToker Justine Paradise who claims Paul forced her to perform oral sex on him in the early hours of July 20, 2019. Paul’s attorney, Daniel E. Gardenswartz, told the Washington Post his client “categorically denies” the allegation and “has every intention of aggressively disproving it and pursuing legal action against those responsible for the defamation of his character.”

Paul further denied the claims in a Twitter post shared on April 13, writing in part, “Sexual assault accusations aren’t something that I, or anyone, should ever take lightly, but to be crystal clear, this claim made against me is 100% false. Not only have I never had any sexual relationship with this individual, but this claim is solely a manufactured accusation and a blatant attempt for attention during a highly visible fight week.”

The fight in question was essentially an afterthought though. The pay-per-view event was more like an hour-long concert with The Black Keys, Justin Bieber and Mount Rushmore’s Snoop Dogg, Ice Cube, E-40 and Too $hort all performing throughout the evening. And with Jake Paul knocking out Ben Askren in the first round, there wasn’t much fighting involved.

Triller’s next big pay-per-view is scheduled for June 5 and features a legitimate title fight, with Teofimo Lopez and George Kambosos Jr., along with an undercard exhibition between Evander Holyfield and Kevin McBride. In the meantime, it’s clear people think Pete Davidson and Jack Harlow were the real winners Saturday night.

Check out the Twitter reactions to their perceived bromance below.

Jack Harlow and Pete Davidson being friends is the best thing that’s happened this year 🥵 pic.twitter.com/SXpXIDoRBK

pete davidson and jack harlow are the dream team pic.twitter.com/x3ggfygKuZ

no but jake paul being intimidated and getting defensive and pete davidson not giving a fuck is the funniest thing. also jack harlow trying not to laugh when pete nearly said “you suck” pic.twitter.com/wE2m9IUrmo

jack harlow and pete davidson present to you: the beginning of white boy summer pic.twitter.com/ut7aLrbag6

Jack Harlow and Pete davidson is the duo we need.