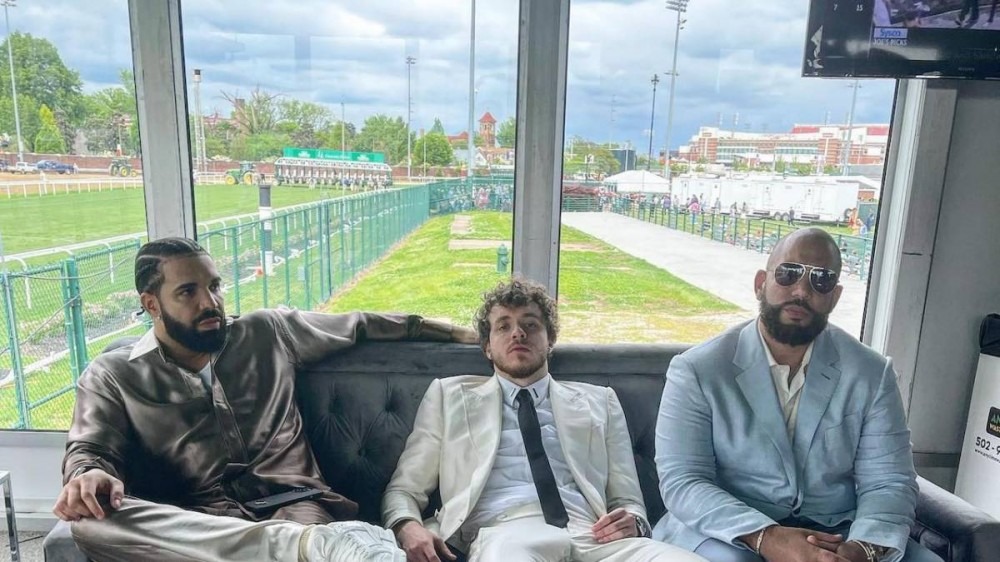 After dropping his sophomore album Come Home The Kids Miss You on Friday (May 6), Harlow took in the 148th running of the Kentucky Derby, annually the biggest sporting event in the state. He wasn’t alone among the star-studded attendees at the Derby as “Churchill Downs” co-star Drake and DJ Drama were also in attendance, not only placing bets and taking in the races but also having good fun during a live interview on NBC.

As Harlow was being interviewed, Drake slid into the frame and spoke to the reporter with glee.

“I just had to show up. I’m so proud of this guy,” Drake said about Harlow. “And we’re drunk.”

He paused for a moment before doubling back and clarifying his comments. “He’s sober. I’m drunk.”

According to the Louisville Courier Journal, crashing NBC interviews and drinking weren’t the only things on the duo’s minds as the two decided to capitalize on the moment fully and shot the music video for “Churchill Downs.”

For both Drake and Drama, it was their first public outing together since Drama revealed the beef between the two, which began during Drake’s then feud with Meek Mill, was finally squashed.

“We gotta stop this narrative lol,” Drama tweeted on Friday. “Me & Drake been put that to rest. Grown men shit, and beyond that Jack & Drake cultivated they own relationship. Now erybody go stream that ‘Churchill Downs’!!”

The impact behind “Churchill Downs” dwindled after the song was unceremoniously leaked to social media, especially as the song wasn’t finished and most of the attention went to lines Drake wrote which many thought were aimed at Pusha T.

During an interview with Hot 97 on Tuesday (May 3), Harlow detailed both he and Drake felt a way about the record being out before it was completely done.

“It hurt my feelings,” Harlow said. “I’m really tight about leaks. I don’t bounce my music so I haven’t had leaks in a long time. I don’t ride to my music while I’m working on an album… the only time we get to experience it is in the studio. I don’t export demos because then you have demo-itis too. You ride to it and you can’t change it because you get addicted to a version. And I don’t want no leaks. That was heartbreaking, especially because that’s an idol of mine. I wanted to control that moment, but it’s destiny.”