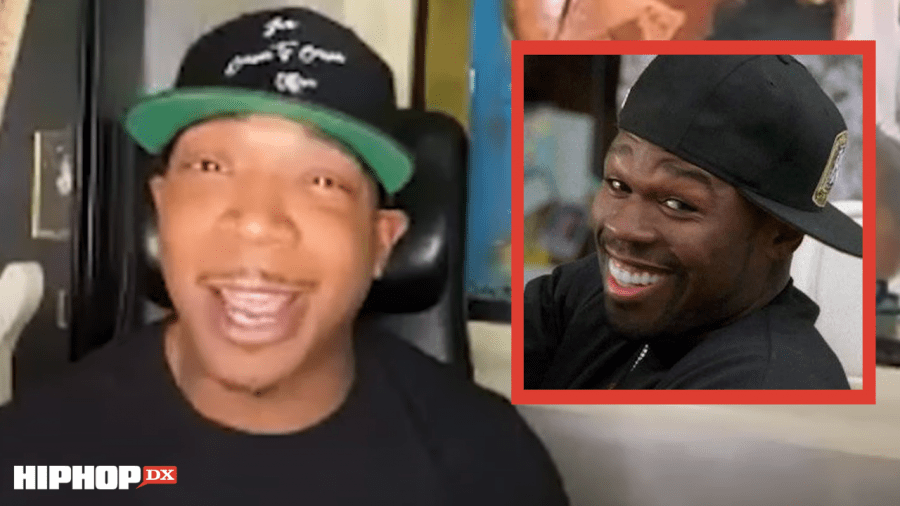 Los Angeles, CA – E-40 and Too $hort’s recent Verzuz battle once again reinforced the value of a good head-to-head face-off between two luminary artists hailing from the same city.

A fact that veteran New York rapper Ja Rule is in agreeance with, but also believes it doesn’t apply to the highly requested matchup that would put him against arch-rival 50 Cent — even if he wanted to do it. During a point in his new exclusive interview with HipHopDX, the former Murder Inc. rapper entertained a Verzuz with 50, saying it would only take a “phone call,” for his involvement, but quickly shot down the idea for good saying it, “ain’t gonna happen,” while also touting his discography as too formidable to compete with.

“Listen, man,” he says wincing. “Everybody don’t want the smoke. Everybody don’t want this smoke. I got heat. Let me tell you something, when I do my shows, I can rock. I’m telling you, it’s like an hour of straight hit records. No filler. All crab meat, nigga. This ain’t the joints with the — you know what I’m saying? All meat in that muthafucking crab cake, nigga. It’s all meat, nigga.”

Further edging away from the idea, Ja goes on to say that he would like his Verzuz to be more positive side than about beef because he feels at his age, tackling his long-standing vendettas are better done in the boxing ring rather than on a stage.

“Listen, man, I love Verzuz, I love what it is, I love to see artists getting in there and doing the shit, but if I did one, if I did do a Verzuz, I would want my Verzuz to be fun,” he proclaims. “That’s what Verzuz is supposed to be about — the celebration of music and the art, and the artistry. So, I would want my Verzuz to be fun, and filled with love in the room and shit, and that sort of thing. I’m too old to be in Verzuz beef, and to be in with my team of niggas, all my team of niggas, we’re like, ‘Come on, man’. I’m 44, dog. Just get a boxing ring and we get in there, and we do that. All this other funny nutty shit, we ain’t doing that, man.”

While spitballing other potential opponents like Nelly and Fat Joe, among others, Ja also inquired the rules of competition, and made clear he would not engage in the “funny, nutty shit,” he sees occurring during the events.

“What are you allowed to do, man,” he inquires. “I be seeing a lot of funny dutty shit going on, on Verzuz. Like, ‘Man, hold up. That ain’t your song! How you playing that on Verzuz?’ So, you can play any song as long as you’re on it? Is that how this goes.” Ja continues. “Y’all don’t want me to break out the original verses! Let me tell you something, I would end Verzuz right there. Don’t let me break out the fucking, the original tracks of fucking ‘I’m Real’ or ‘Rainy Days’ with just me singing on the whole shit!”

Ja Rule has eight Billboard Top Ten Hot 100 appearances, three of them being No. 1 hits, including his 2001 smash record “I’m Real,” featuring Jennifer Lopez. By contrast, his foe 50 Cent has four No. 1 songs on the Billboard Hot 100 Chart and a total of 13 Top Ten entries like his 2011 collaboration with Jeremih “Down On Me,” which reached the No. 4 spot.

Watch the full video clip above and revisit the first installment of DX’s interview with Ja Rule here.