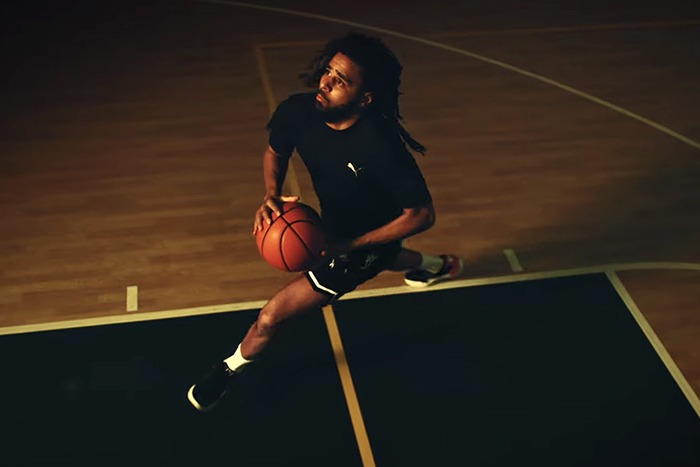 J. Cole is living out his hoop dreams.

The baller-turned-rapper has teamed up with Puma on a new basketball-inspired collection. To launch the collaboration, he has debuted an inspiring short film called “The Dreamer” that follows his own journey from a young kid watching the older kids play basketball before taking a shot himself.

Soundtracked by Labi Siffre’s “My Song” and Billy Joel’s “Vienna,” the 5-minute video features throwback footage of a young Cole playing ball in North Carolina to present day Cole. After missing several shots, including one at last year’s NBA All-Star Game, the video ends with him sinking a basket.

Cole played basketball in high school and was a walk-on player at his alma mater, St. John’s University, before going on to release his breakout mixtape The Warm Up in 2009.

As Puma’s newest ambassador, Cole has launched his Sky Dreamer sneaker. The ’80s-inspired mid-top features Puma Hoops technology with Dreamville’s “Dreamer” emblem. The white shoe, which Cole has been seen wearing in public, retails for $130.

The Sky Dreamer is part of a multi-year footwear and apparel deal with Puma, which will be followed by Cole’s own Dreamer footwear and apparel line later this year. “He is going to be a key player in many of the things we do at Puma moving forward, and we’re excited to work with him not only on a product level but even more importantly as one of our athletes,” said Adam Petrick, Puma’s global director of brand and marketing. “Cole sits at the intersection of music and sport and represents everything that Puma stands for as a brand.”

Meanwhile, the Dreamville boss is gearing up to release his new album The Fall Off. In November, he teased the project during his headlining set at the Day N Vegas festival.