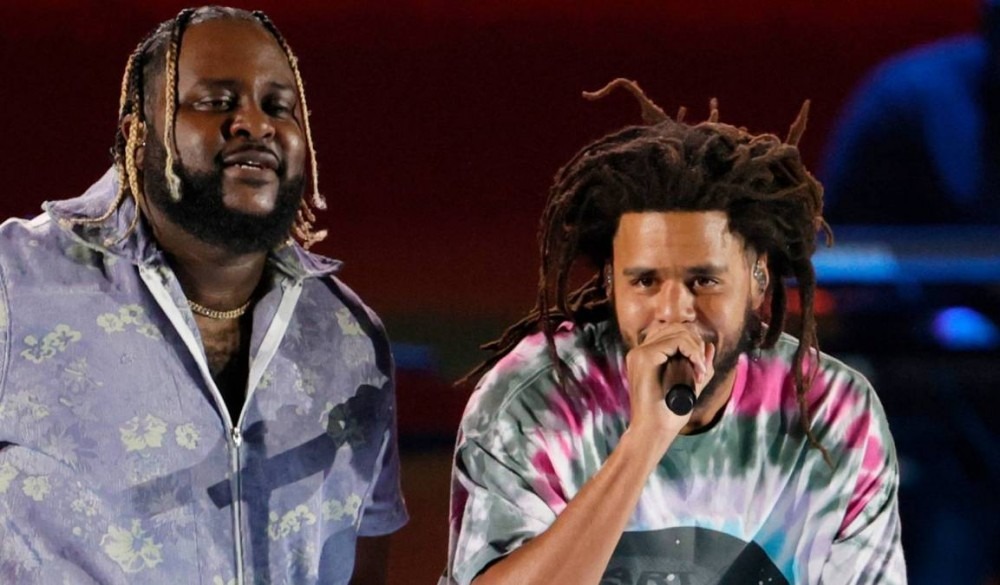 Better known as J. Cole, the ambitious student had dreams of making it as a Hip Hop artist — and he did. Loyal as ever, Cole made Hamad his manager and president of Dreamville Records and encouraged Bas to rap as well, bringing them both along for the ride.

Fast-forward to 2021 and Bas still feels fortunate to work alongside such a creative genius. In July, the two paired up for a single and accompanying video called “The Jackie,” which found them cruising around New York City in a convertible Chrysler LeBaron with Cole playing the role of an Uber driver. Much like the visual for 2018’s “Tribe,” it was immediately clear how effortless their collaborative relationship truly is.

During a recent interview with HipHopDX, Bas opened up about the profound effect Cole has had on not only his career but also his life in general.

“Cole makes me want to work harder,” he told DX. “That’s for sure. You know? Just how dedicated he still remains to his craft, as someone who’s achieved what most of us want and aspire to. You know, levels we all aspire to get to. He’s reached it in this field.

“I got to work with him on the Off-Season and just seeing his work ethic and his commitment to working on his craft every day. I’m like, ‘Man, it’ll definitely make you feel like you’ve been slacking.’”

But Bas hasn’t been slacking by any stretch of the imagination since launching his career in 2007. His moment of clarity came after a long night of partying when he realized he wanted to give rapping a legitimate try, something he credits for saving his life.

“I was getting in trouble a bit,” he explained. “I was in this phase of life, where I had dropped out of school, and I was just doing all the wrong things. So my [younger] brother DJ Moma gave me his MacBook. He was DJing all over New York, and he was like, ‘Just start opening up my gigs for me.’ He’s always been playing me records, since I was a kid.

“So I started DJing around New York for a year and then with that same laptop … one of my homie’s convinced me at an afterparty to just put on GarageBand, and we did a track. It might’ve been 11 of us on the song. The song was 15 minutes long. We wouldn’t even stop to edit it; it was just a continuous recording. You hear dudes cracking and rolling up weed on the record. We were just having some fun with it.”

The next day, Bas and his friends woke up — sober — and realized they just might be onto something.

“We were like, ‘Man, this is kind of tight,’” he recalled. “I think it just hit me. Up until that point, I had never had any creative outlet or creative form of expression. I think I didn’t realize how addictive it is to have something like that in your life and how important it is to have that in your life. It gave me discipline. For the first time in life, I had something that I really, really wanted to learn and get better at.

“It just disciplined me to get up, and work on my craft every day. You know what I mean? Go to the studio. Right? Music definitely gave me that at a time when I really needed it.”

On October 23, Bas and his Dreamville family — J.I.D, EarthGang, Ari Lennox, Cozz, Lute and Omen — will descend on Red Rocks Amphitheatre in Morrison, Colorado for a rare, star-studded show. The event will mark one of the first major concerts Bas has done since the COVID-19 pandemic began its rampage last year.

Meanwhile, J. Cole surprised his fans this week when he dropped a surprise video for “Heavens EP,” which finds him rapping over Drake’s “Pipe Down” instrumental. At one point in the song, he addresses his unwavering work ethic and suggests it’s almost like a curse.

“I’m kicking my feet up while I’m writing this somewhere tropical,” he raps. “Supposed to be relaxing this passion makes that impossible.”

But one thing’s certain, Bas took a page from Cole and isn’t slowing down anytime soon.

Tickets for the Red Rocks Dreamville show are available here.