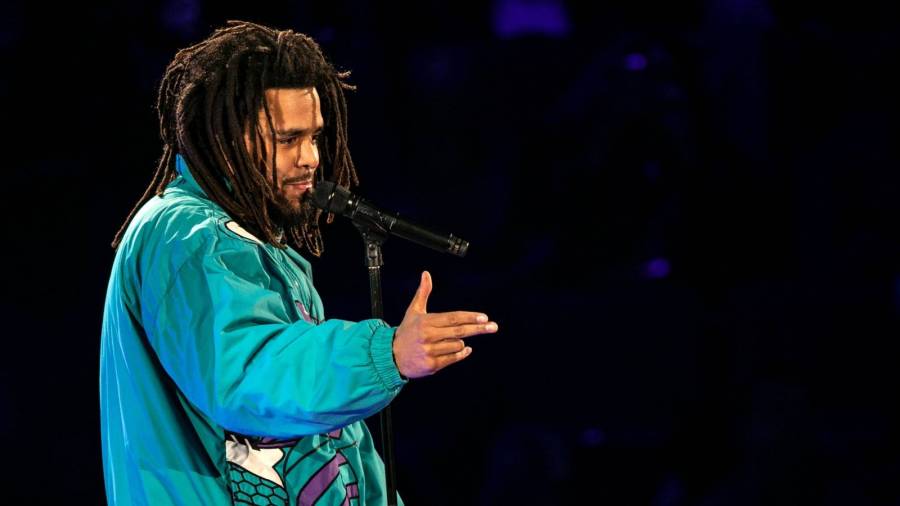 As Twitter attempted to cancel VladTV and slowly pick apart singer Ann Marie’s recent arrest, J. Cole’s name somehow made its way through the muck as chatter surrounding his next album started to heat up.

On Tuesday (December 8), Hip Hop fans were on high alert after a Twitter user who goes by the handle @Azarrella9 (or AZ) shared a tweet claiming he was with Dreamville Records president Ibrahim Hamad (better known as Ibrahim H.) who’d cleared Cole’s long-awaited album The Fall Off for a Wednesday (December 9) release.

“Just landed in Raleigh with @KingOfQueenz,” the since-deleted tweet read. “Jermaines Album has been cleared for streaming services. The Fall Off 2020 will be dropping tonight, December 9th.”

Upon closer inspection, the bio at the top of the AZ page states, “Absolutely not to be taken seriously” and it quickly became clear there was no real basis to the rumor.

Editor-In-Chief Z of DJ Booth also debunked the claim with a tweet that read, “I just spoke with Interscope. J. Cole is NOT releasing an album this evening, or anything this month. Andrew is a clout-chasing liar liar pants on fire.”

I just spoke with Interscope. J. Cole is NOT releasing an album this evening, or anytime this month. Andrew is an clout-chasing liar liar pants on fire. https://t.co/K8iy5u0JEv

Nevertheless, Cole fans still went wild with speculation, with many wholeheartedly believing the long awaited follow-up to 2018’s KOD was imminent, especially since 2014 Forest Hill Drive and 4 Your Eyez Only both dropped on December 9. But when the magical streaming hour of midnight EST hit, nothing materialized, leaving fans angry, disappointed and confused.

There was one consolation — sort of. An official video for “Fire Squad” arrived on Cole’s YouTube channel Wednesday afternoon. Dreamville sent out a tweet shortly after the video’s arrival and explained, “A bunch of @JColeNC videos got deleted way back and today were getting them all back up. And because it’s the anniversary #FHD heres the world premiere of the never before released video for ‘Fire Squad’ Happy Holidays!”

A bunch of @JColeNC videos got deleted way back and today were getting them all back up. And because it’s the anniversary #FHD heres the world premiere of the never before released video for ‘Fire Squad’ 🔥🔥🔥 Happy Holidays! https://t.co/103ttJ79Hh pic.twitter.com/MDJgOwjZH2

“This year I’ll prolly go to the awards dappered down,” he rapped at the time. “Watch Iggy win a Grammy as I try to crack a smile/I’m just playin’, but all good jokes contain true shit.”

Directed by Maxim Bohichik, the visual begins with a young African girl playing chess with an older man while Cole stands against a bullet-riddled wall. As cars kick up dirt around him in the next scene, he raps, “Ain’t a way around it no more, I am the greatest/A lotta niggas sat on the thrown, I am the latest/I am the bravest, go toe to toe with the giants.”

While technically, the video is something new from Cole, it’s difficult to determine whether that made his fans happy or just more annoyed.

Everyone thinking the new J. Cole album dropping today and the dude drops a music video for a 6 year old song 😂😂 pic.twitter.com/IyZHruX0Sz

lmaooo yall got pump faked into a album but it was just a music video from 6 yrs ago….. @JColeNC funny……..go STREAM THAT NEW KURBURUS NIGGAhttps://t.co/yYILlXmht3

to whoever whoever said j cole was dropping tonight pic.twitter.com/Jwcf9udiZT

Me at 12 o’clock when J cole doesn’t drop the album #TheFallOff pic.twitter.com/xtixUWNP16

J Cole is dropping everything but the album

@JColeNC does this mean your dropping the album soon?? mf added his whole sideline story videos back 😩😩 pic.twitter.com/O27B2sIBcX

J Cole is re-dropping all the songs he dropped on his come up. He's about to drop an album called The Fall Off.. man's a genius.

*Me watching J. Cole release all of his old videos on the anniversary of FHD and 4YEO* pic.twitter.com/MEmlffz1tc

Whoever said The Fall Off was releasing today is just a clout chaser. Everyone knows that artists only release albums on Friday. Since it's almost the end of 2020, J Cole is gonna release it either the 11th, 18th, or 25th. And if not, he just wasn't ready.

Me Right now since I got my hopes up twice that J Cole was dropping #TheFallOff pic.twitter.com/Wqmiz8ndqm

J Cole releasing the video of the song which he said “ I’m the greatest A lotta niggas sat on the thrown, I am the latest
I am the bravest, go toe to toe with the giants
I ain't afraid of you niggas, I'll end up fading you niggas”. Definitely J Cole is dropping the album soon 😭

While we are all here waiting for the fall off album, J.Cole is busy checking his archives to release old videos. Crazy stuff.