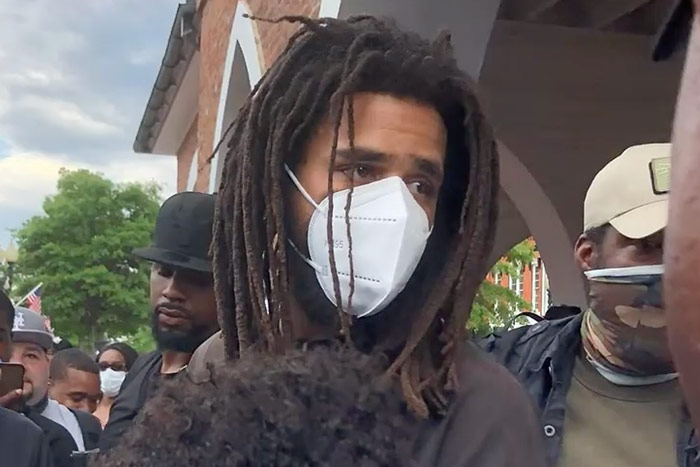 The North Carolina rapper was among those protesting the death of George Floyd in his hometown of Fayetteville on Saturday afternoon. Wearing a mask, Cole tried to keep a low profile while standing in a crowd of protesters that started at a local Walmart.

The protest was organized by Rakeem Jones, who was in the headlines after he was punched in the face at a Trump rally. Fayetteville mayor Mitch Colvin also attended the rally.

Protests spread across the country. In Los Angeles, Tinashe hit the streets to demand justice for Floyd, an unarmed black man who was killed by a white police officer in Minneapolis. “The protest I participated in yesterday in DTLA was non violent. We were there to protest police brutality and black lives, period,” said Tinashe, who held a “Black Lives Matter” sign.

LIVE. NO JUSTICE, NO PEACE. LOS ANGELES MAY 30TH 2020. RESPECT EXISTENCE OR EXPECT RESISTANCE. #BLACKLIVESMATTER OUTSIDE INSIDE TODAY YESTERDAY TOMORROW AND FOREVER. POWER TO THE PEOPLE.

Ariana Grande was also spotted in the streets of Beverly Hills with a “Black Lives Matter” sign, while Machine Gun Kelly marched with a message: “Silence is betrayal.”

Fresh off the release of his new album Lil Boat 3, Lil Yachty addressed the destruction in his hometown of Atlanta while spreading a peaceful message to residents. “It’s unfortunate that we gotta do this just to show our frustration,” he said. “We gon’ stick together, ’cause that’s most important, whether you’re black, whether you’re white, green, yellow, purple, we together.”

In the middle of the peaceful protest being lead by @celtics F Jaylen Brown, @lilyachty is giving a powerful message. “Whether you’re black, whether you’re white, green, yellow or purple we’re together.” (video posted on @FCHWPO IG) #AtlantaProtest #11Alive pic.twitter.com/wLloXXfsfc