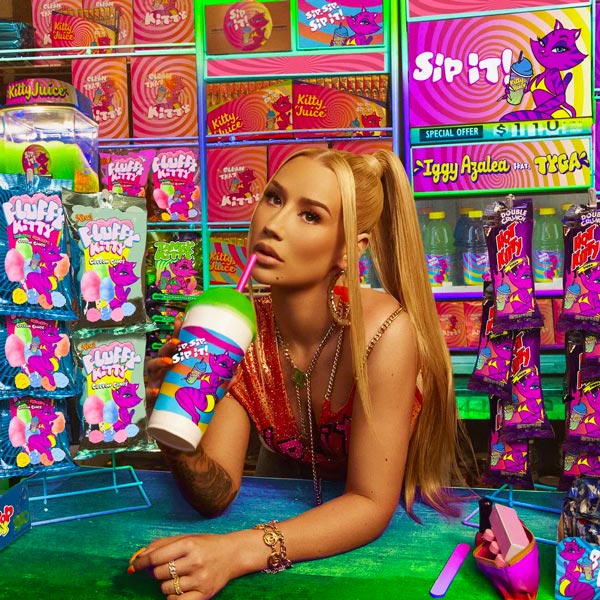 Iggy Azalea is back.

On “Sip It,” her first release in eight months, the new mom reunites with her “Kream” collaborator Tyga. The provocative slapper, produced by OG Parker (Drake, Migos), finds Iggy bringing all the boys to the yard.

“Rappers in my phone, in my DM, won’t leave me alone / Boys on my dick / Sip this pussy like it’s Styrofoam,” she raps, while T-Raww adds his own raunchy verse.

The song arrives alongside an eye candy-filled visual that features a cameo from 19-year-old TikTok sensation ppcocaine. In the trippy clip, which carries a warning for epilepsy, Iggy works the late shift at a gas station convenience store where they serve their own psychedelic Slurpees called “Kitty Juice.” Basking under black lights, she performs some NSFW moves on the countertops and pours milk on her twerking co-star before Tyga pulls up in a red Corvette with the license plate “Kream 2.0.”

Additionally, Iggy serves up a B-side to “Sip It” called “Brazil,” inspired by her love for the South American country. “Whenever I’ve visited Brazil it’s been the most hype crowd! Brazilians know how to go wild and have fun at a concert,” she tweeted.

The pair of tracks arrive ahead of her upcoming album End of an Era, which promises a return to her mixtape roots. “If my mixtapes are why you fell in love with me I can tell you now you will implode when you hear my album in full,” she told a fan.

Back in August, Iggy released the Tinashe-assisted single “DLNW (Dance Like Nobody’s Watching).”