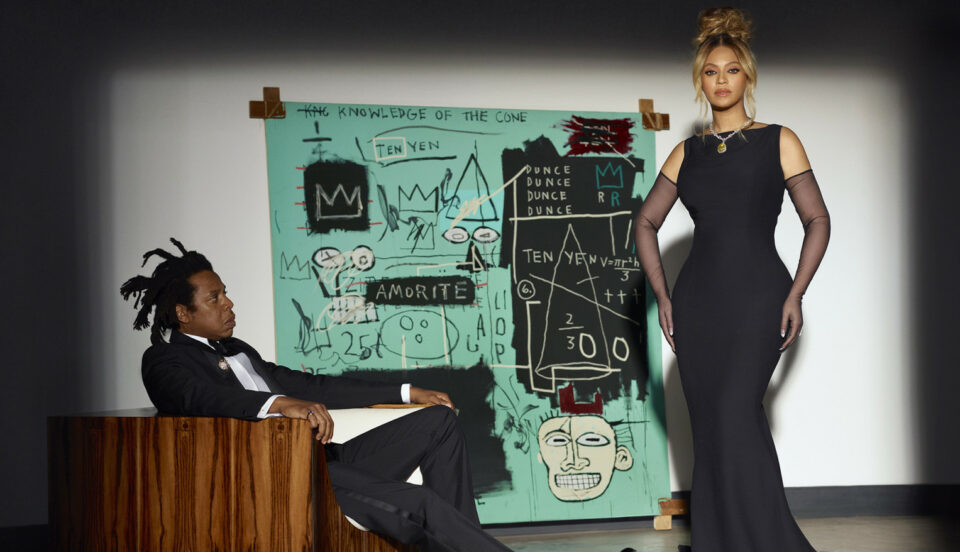 The new Tiffany’s campaign teaser has the billionaire couple in the hot seat.

On Monday, the jewelry company released a teaser for their upcoming ad titled “About Love,” showing the celebrity power house couple together with Beyoncé dawning a 30-million-dollar, 128-carat, yellow diamond Tiffany necklace.

In doing so, Beyoncé became the first Black woman to rock the iconic 128-carat gem stone that Audrey Hepburn wore in Breakfast at Tiffany’s. This is also the first time we’ve seen Hov and Beyoncé appear in an ad together.

The billionaire couple is seen posed in front of a rare painting, Equals Pi by Jay-Z’s favorite artist, Jean-Michel Basquiat [[ Zhohn Mee-shell Baa-skee-ah ]].  The 1982 piece was sold in a private collection over thirty years ago and has never been seen before in public. Ironically the paining’s canvas primary color is Tiffany’s signature robin’s egg blue.

Shortly after the ad teaser dropped, Basquiat became a trending Twitter topic with many speculating how the famously anti-capitalist Brooklyn-born artist would likely feel about his artwork being used to sell jewelry.

However according to reports, Alexandre Arnault, the executive vice president of products and communications at Tiffany & Co. confirmed the artwork belongs to Tiffany’s. In the ad it visibly states the usage was licensed with permission “© Estate of Jean-Michel Basquiat. Licensed by Artestar, New York.”

The company acquired the painting earlier this year and maybe the only luxury campaign in history to include the purchase of a Basquiat in its budget. Not to mention including a $2 million donation to HBCU’s for scholarships and internships. That has to be Twitter worthy, no?

Despite the backlash, Tiffany & Co. is on the books with a ton of money for their yearlong campaign with the Carters. The new faces of the “ABOUT LOVE” campaign will be featured in a short film with Beyoncé singing “Moon River” to Jay-Z.

The full Tiffany’s ad will be unveiled on September 3rd.

It’s seemingly very easy for people to point the finger at Jay-Z and Beyoncé. What are your thoughts on the couple receiving backlash for their new commercial for Tiffany & Co.? Share your comments below.