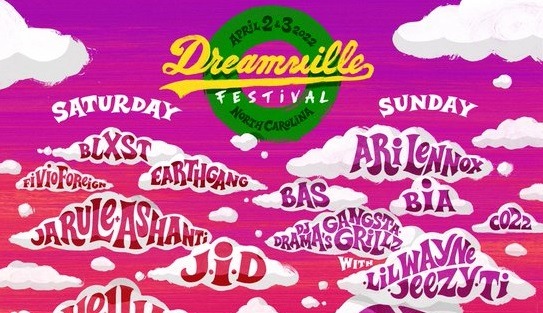 J. Cole and his Dreamville crew have revealed the whole music lineup for the second edition of Dreamville Festival, which will take place on Saturday, April 2 and Sunday, April 3 this spring. DreamvilleFest.com has tickets available now

Cole has invited some of his favorite musicians and collaborators to join him in his home state of North Carolina for one of the most anticipated music events of the year for his festival’s long-awaited return. On Saturday, Lil Baby will headline, with WizKid, Kehlani, Morray, and Fivio Foreign also performing; on Sunday, DJ Drama’s Gangsta Grillz will perform for the first time, with Lil Wayne, Jeezy, and T.I., as well as a diverse lineup of artists including Ari Lennox, Moneybagg Yo, Bia, Rico Nasty, Wale, and Larry June, plus a headlining set from J. Cole to close out the weekend.

“We always set out to curate something special. Our Dreamville family has been patiently waiting for the fest’s return and now we’re back with a lineup unlike anything else found in today’s event landscape,” said Dreamville Partner and Festival President Adam Roy.

Cole is bringing together the entire Dreamville Records music roster to play at the enlarged two-day event, which will represent a rare reunion for the label. In addition to Cole, notable Dreamville performers due to perform include Ari Lennox, Bas, J.I.D, EarthGang, Cozz, and Omen, as well as Lute from nearby Charlotte.

Fans at Dreamville Festival 2022 will be treated to a spectacular on-stage reunion from Ja Rule and Ashanti, as well as R&B’s auto-tune pioneer T-Pain, in addition to the launch of the Gangsta Grillz joint performance starring three southern rap superstars and hosted by none other than DJ Drama.

The official Dreamville Festival charity partners, the Dreamville Foundation and Dorothea Dix Park Conservancy, will get a portion of the proceeds from the 2022 event. Visit www.Dreamville.com and www.DixPark.org for additional information on these organizations.