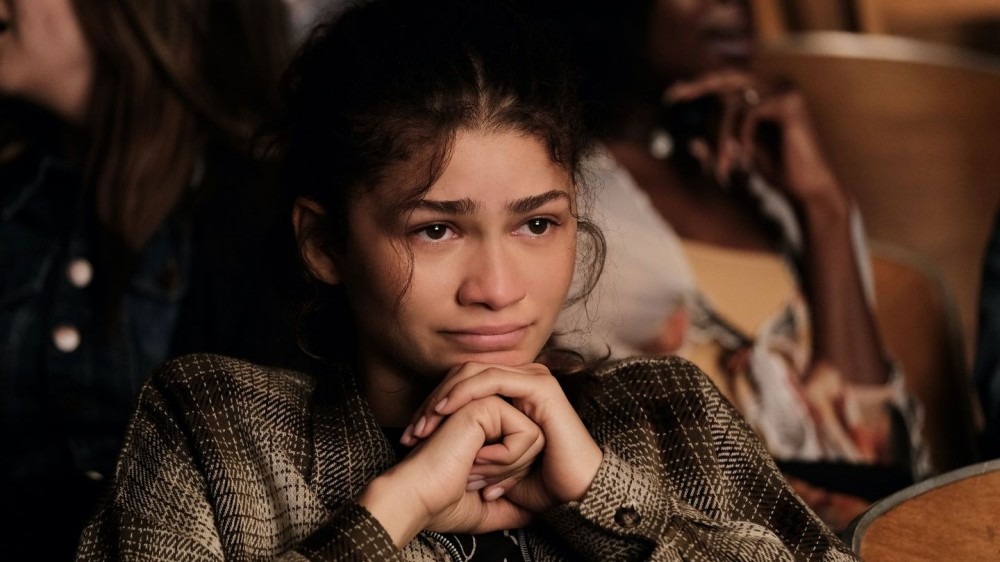 The record-breaking HBO series Euphoria has kept fans talking for the entirety of Season 2’s eight-week run, which concluded with a shocking finale last night (February 27). It was so hyped, in fact, that HBO Max experienced streaming issues right around 9 p.m. presumably due to the sheer number of viewers tuning in. Aside from its critically acclaimed performances, the starpower of its actors, and gripping storylines, one element in particular has captivated audiences: the music. For that, fans can largely thank award-winning singer-songwriter and producer Labrinth, the show’s composer.

“I knew it was a teen drama, but I knew it was gnarly,” he tells MTV News about signing onto the show ahead of its 2019 premiere. “I knew it was definitely on the darker side of things. But I was like, if I’m going to do any music for TV, I would want it to be crazy or as intense as what I would want to make musically. So it felt like the perfect fit for what I wanted to do.”

Since then, his work has spanned two seasons of original music, two Emmy nominations for the score, and an Ivor Novello Award for Best Television Soundtrack. Sunday’s finale also featured a powerful new collaboration with star Zendaya — the single “I’m Tired,” which came out Monday at midnight. Labrinth himself performed it on the show in the fourth episode, “You Who Cannot See, Think of Those Who Can,” in an instantly memorable church scene. But for the finale, it had to be revamped.

“I didn’t love the version we released, so I took it offline because I wanted to make it sound better, and also, I heard Zendaya sing it… and I was just like, I actually like her version better,” he says. After a call from Zendaya fielding an idea she had, the two assembled in the studio along with show creator Sam Levinson to record an entirely new rendition of the track. “Me, Sam, and Zendaya wrote the song together, and I think it was fun to actually write with people and not be stuck in a room, bashing my head against the wall. Zendaya was like, ‘Lab, we need some of your weird vocals,’ and then I started recording my little choir vocals that I do.”

Zenday’s emotional contributions to this new take on “I’m Tired” feel reminiscent of Rue’s journey itself. “We all know Zendaya is the multi-talented mad genius that she is, so it was just nice to hear her in such a raw, intimate vocal that she sang.”

Part of Rue’s journey found her grieving her late father in a church midway through the season, with Labrinth singing soulfully in the center of the scene. His manager pitched the idea of putting Labrinth, who is not an actor, into the show to Levinson, who was all for it. “Sam orchestrated this idea of me singing in the church and Rue coming down the aisle,” he says. “It felt like an out-of-body experience, but a realization, all of these different emotions going on at the same time.”

Labrinth compares the emotional connection he felt in that scene with Zendaya to the creative connection they share in the studio. “She’s my sister in music. And same with Sam. He’s my brother in creativity. So to do a scene with her and to almost show the physical version of our relationship as creatives, it felt like me, Sam, and Zendaya almost had this hug. You can see our creativity, like, this is what it is together. So for me, it felt poetic to the way we create together. And then, it being the song that we all wrote together, it feels like just all of our hands clasping together. I think I was proud of that scene because it meant more than just what it was for Rue in that scene.”

Labrinth in 2022’s episode “You Who Cannot See, Think of Those Who Can”

As a Grammy- and Golden Globe-nominated producer, Labrinth’s success in the realms of pop, gospel, and R&B music is clear. But creating music for television was a whole new feat he was eager to take on. “I think composers do incredible stuff that I can never do,” he says. “But for me, I’m a producer as well as a composer, so I’m like, I know when a track makes my neck snap. So I’m like, why can’t TV music have music that makes your neck snap and makes you feel like, oh, I could listen to this without seeing the show?”

Labrinth and the team behind Euphoria have used both the score and outside music additions to add an intensity to the show’s already exhilarating story, amplifying its hold on viewers. That exhilaration often comes about spontaneously for Labrinth. He explains the creative inspiration for how a piece of music for the score comes to fruition, like “Nate’s internal anger that’s slowly piercing out, especially in Season 1. I would write to just that energy, or I would write to Cal trying to hide in the dark and trying to keep this perfect appearance in the public.” Or he’d vibe with Zendaya walking into the studio and explain how Rue is feeling and what she’s going through. Additionally, Labrinth credits Levinson with helping him find his “rawest self” and points out how many times the music was a result of an idea Levinson had or was inspired by. “Sam is really instrumental in going, ‘I really think this is a vibe. I need more pressure, Lab. I need more anger. I need more rage.’”

“Sometimes, me and Sam have a talk, and he would send me music from his playlist or things he enjoys and music that’s inspiring scenes that he’s written to,” he continues. “Or I would get music sent from editorial, and they would be like, this specific cue, that specific cue. And then sometimes, especially on Season 2, me and Sam actually sat in the studio and worked some of the music out together.”

Looking ahead to Season 3

A huge driving force of the show’s success and the timely release of songs like “I’m Tired” is its fans. Euphoria has seen show-themed music trends, like Maddy/Cassie makeup tutorials, go viral on TikTok, and every week, new memes explode online. The overwhelming reception has validated that what Labrinth is doing in the studio makes sense. “To actually make a song is internally so intense. It actually affects your health sometimes. And especially when you’re scared of having to share what you are doing with an audience, it can really mess with you — and also not to compromise your music, compromise what you actually want to say because of what you think the world might need or what’s going to be popular.”

“I’ve learned to not give a shit about what anyone’s going to think musically,” he says. “This validates that mentality, where I just go, I’m going to say whatever my soul wants to say, and the fans are saying keep doing that.” Whether it’s a parade of tweets from fans begging for the release of the songs they’ve heard in the episodes, like “I’m Tired” and “Yeh I Fuckin’ Did It,” or even friends and creative counterparts reaching out to offer their praise, Labrinth remains focused on his mission of creating compelling music and working with the powers behind Euphoria. “I feel like I just do my part and I make sure I feel it. That’s all it is,” he says. “When I’m writing a piece of music or when I’m producing something for the show, I’m just like, what would make me excited if I saw this with this scene?”

As for the newly greenlit third season, Labrinth admits he has not thought about it at all. But he’s eager for a little more assistance. “This season has been insanely hard, and it’s been very difficult to get through. But I’m just going to go and sleep. If they want me to do Season 3, I will have to hire some more people to help me because this is hard,” he says with a laugh.

In the meantime, Labrinth says his plans are to release the official score, then his own album, and to enjoy what has come out of the smash hit that was Season 2 of Euphoria. Looks like he might not be getting much sleep after all.