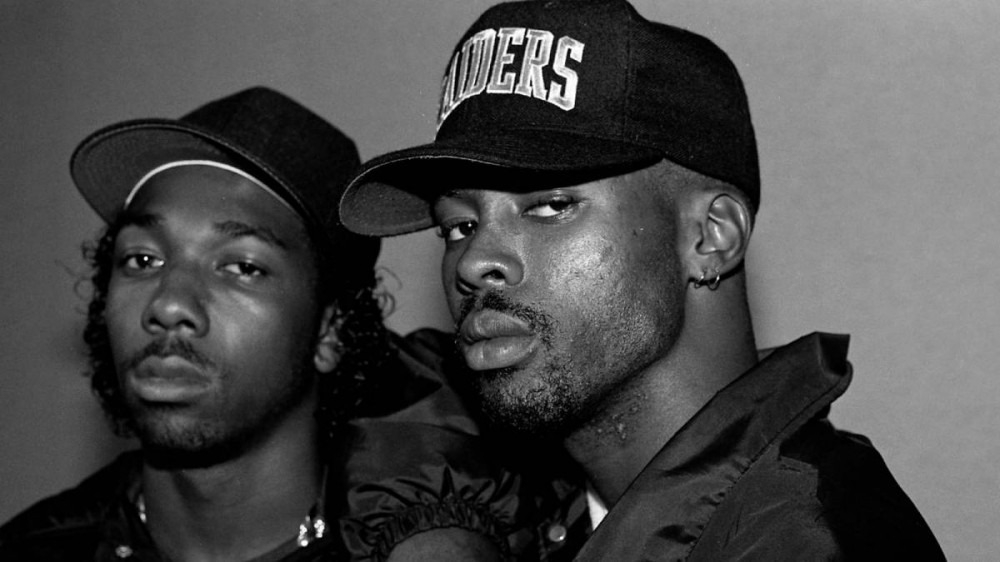 Exclusive – With the 30th anniversary celebration of Death Row Records in full swing, the iconic label has revamped its website, merch store and social media accounts.

But the West Coast OGs were integral in establishing the Death Row name. Unbeknownst to even some of the most studious Hip Hop scholars, CMW actually came up with the name as Death Row was just beginning its ascent.

As Payne notes in the Instagram clip, “They had something to do with the Death Row legacy and while they’re living, we’re gonna give ’em their flowers right now.”

During an interview with HipHopDX, Payne explained how Compton’s Most Wanted producer The Unknown DJ didn’t exactly have permission to bring the name to Dr. Dre and company. In 1996, The D.O.C. told the Dallas Observer the label was originally called Future Sounds and he’d suggested changing the name of the new label to Def Row, but the name was already owned by Unknown.

“They had a producer named Unknown who was actually doing some stuff with us,” Payne says. “He worked with me and Rhythm D on the Paradise track ‘Down With My N-gga’ for the Deep Cover soundtrack. I wasn’t in the room when the taking of the name happened. Even talking to Tha Chill and the guys, I do know they had it first. I can recall going in and the next day, Unknown physically didn’t look the same, so somebody had touched him in not a pleasant way.

He adds, “I think if I’m correct, I think Unknown was paid some money. I don’t know if he paid them. I don’t know if their name was on the agreement, but there was a legal contract that was written for the name after the fact, after the appropriation of the name, so to speak.”

As MC Eiht confirmed to DX, CMW had spelled the name Def Row, a nod to Def Jam Recordings who was killing it on the East Coast with artists such as Public Enemy, Beastie Boys and LL COOL J.

“We helped come up with the name — me, DJ Slip, Tha Chill and Unknown,” Eiht says. “Unknown told us they were about to start a new label — Dr. Dre, Suge Knight and them. The Convicts were supposed to be first group, so they were thinking of a name. We thought we were gonna be a part of the lineup as well, so we came up with Def Row to mimic Def Jam — like we were gang n-ggas and convicts rappin, et cetera.

“So Def Row/GF Entertainment — that was Harry O’s company. They had leather jackets in the beginning with logo on ’em in turquoise. Unknown and Slip were supposedly hired as in-house producer, but I ended up going solo and dealt with Epic direct then they changed it to Death Row.”

When reached for comment Tha Chill admitted he never told the “very true story” because he didn’t want to come across as a clout chaser. But he figured, “Fuck it” and corroborated the story anyway.

“Me, Eiht and our producers in our early days — DJ Slip and Unknown DJ — were at the dinner table in a famous go-to restaurant called Harold and Bells in L.A.,” Chill tells DX. “Unknown was talking to us about linking up with Dr. Dre and The D.O.C. on a new label situation. They was working with Big Mike and Lord 32 in a group the had called The Convicts.

“Unknown said they needed a name for the label. Me and Eiht threw around a few names in reference to Def Jam, meaning we needed something big like that on the West.”

Tha Chill says the last name they came up with was Def Row, but they didn’t want it to look like they were “biting,” so they spelled it Death Row.

“We put the man in the chair like he was getting shocked with a bag on his head,” he continues. “We laughed at it and continued our dinner and drinks . This is around the time Eiht had a solo deal at Epic, so for me as a group member of CMW, I was excited about the possibility of rockin’ with Dre and D.O.C.

“Nothing ever came out of it because later we learned Unknown had did something over there and got his ass whooped for whatever reason. We laughed at that as well [laughs]. I always looked at Death Row as they bubbled up and always thought, ‘Damn ! We was supposed to be over there doin’ our thing but, thanks to Unknown DJ and that ass whooping he got, we didn’t make it.”

In the beginning of the Instagram clip, Payne makes a slick reference to Unknown with, “For some unknown reason, we ended up with the name Death Row.” Payne believes he got paid around $25,000 for the name at the time, peanuts compared to the $100 million a year Death Row would make at its peak.

Check back with HipHopDX soon for Part II of the John Payne/Death Row Records interview and find more information on Death Row here.