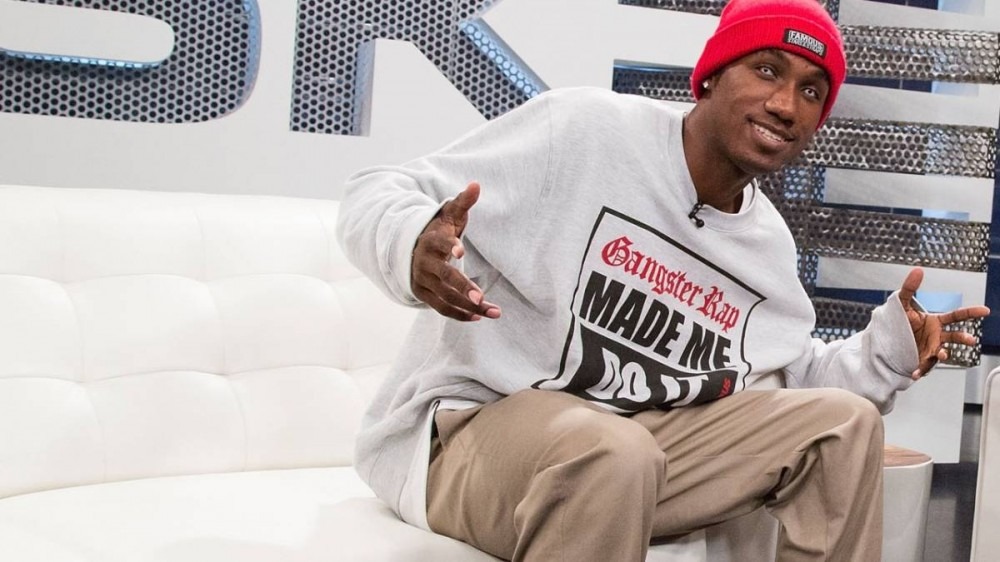 Exclusive – Not many people have been brave enough to diss Ruthless Records — but Hopsin isn’t your ordinary rapper. After signing with the iconic imprint in 2007, the Los Angeles native thought his career was about to explode with the backing of the same label that put gangsta rap on the map.

But Hopsin was met with a rude awakening when they botched the release of his debut album, Gazing at the Moonlight, stalling his career for over three years in the process.

“When you get a record deal, it’s like you finally did it,” Hopsin tells HipHopDX. “It’s like you winning the lottery, where you’re like, ‘Oh my God, this is my shot!’ You think that your life is about to change and they make all these promises to you, and then none of it happens.

“But it was just your typical record label situation where they sign you and they don’t really know what they’re doing with you. They don’t know how to market you because you’re a weird, left-field talent. They just ended up shelving me and nothing ever really happened.”

“They’re just giving you the run around going, ‘Oh wait, we’re waiting for this to come in. OK. We’re waiting for this new one,’” he continues. “Then you’re like, ‘Holy shit.’ Three years have gone by and you guys haven’t done anything. Then they keep still going, ‘No, no, no. It’s about to.’”

That’s when Hopsin decided to take matters into his own hands and out the label for allegedly mishandling his contract.

“I got to the point where it was just like, ‘Man, fuck you guys. Get the fuck out. My life is going. This is a real life that I’m living and you guys are wasting my time that I’ll never get back,’” he explains. “So I was like, if I’m not going to get fame and money and fans with you, I’ll get it dissing you for you guys wasting my time. That’s how you guys will pay off the debt, so thank you.”

Hopsin’s core fans were aware of the situation and fully backed his decision to unleash on Ruthless at the time.

“They know because I dissed the owner of Ruthless who was Eazy-E’s wife [Tomica Wright],” he says. “I made a very big deal about it for a lot of years. So that was part of the stepping stone, me dissing the owner was one of the stepping stones to me getting to where I’m at. Because I just got played. I got screwed over. I just got the bamboozled, and I needed to tell that story.”

Hopsin has always cited Slim Shady as an inspiration, but he wasn’t prepared to be name-dropped on Kamikaze in 2018. While Eminem dissed numerous rappers on the album, including Lil Pump and Machine Gun Kelly, he gave Hopsin nothing but love.

“Don’t tell me ’bout the culture/I inspire the Hopsins, the Logics, the Coles,” he rapped on “The Fall.” “The Seans, the K-Dots, the 5’9s and oh/Brought the world 50 Cent, you did squat.”

Hopsin’s reaction to the song was priceless and proved he’s as much a fan as he is an artist. Shortly after the album dropped, Hopsin jumped on Instagram to tell his 1.5 million followers how much it meant to him.

“Eminem just said my name on his god damn song on his new album,” he said in a video clip at the time. “This shit is crazy. Listen. What the fuck! I didn’t even know he knew who the fuck I was! God damn. He said don’t tell him about the culture, implying I’m part of the culture. Oh shit, man. I gotta call my mom.”

“Every time I hear it, I’m like, ‘I did it, I did it,’” he says. “Out of all the rappers in the world, I’ve done something good enough for him to name me … out of all of them. There’s so many, and he put my name in there and he did it first, my name is first. Then my brain, the same guy that brings out the insecurities, also brings out the positives. I mean it’s like, ‘He said your name first, but he said your name, which means that you’ve been in his brain.

He continues, “And every so often my name will probably just pop up in his brain and who knows how long it’s in there. It could have been there for 10 years, who knows? That means he’s had to watch my videos. He’s had to sit there. Eminem is a harsh critic on music. So that means he’s had to sit there and go, ‘Hmm, I like this guy.’ So I wonder what the stuff he’s seen. I wonder what made him go, this guy’s dope?”

But like any artist, or human being for that matter, there comes a time when we need to hit pause. After taking some time off for his mental health in 2019, Hopsin made his triumphant return last year with “Covid Mansion.”

One of his most recent videos, “Alone With Me,” has already racked up over eight million YouTube views since its release in March, again proving he didn’t need Ruthless Records’ promo to “make it.”

These days, Hopsin has been galavanting around the world with his skateboard in tow. After a stint in Thailand, he now temporarily resides in Amsterdam where he’s living his life to the fullest while plotting his next moves.

“Every time I came here, I was like, ‘Man, one day when I’m brave enough, I’m going to just take a leap and just move out here,’” he says. “‘Maybe for six months to a year and just try it out.’ This is that year. This is that year where I’m comfortable enough with traveling.

“I didn’t know how to travel back then. I had tour managers and everything. I didn’t really know what I was doing, but now I get it. So I just came out here by myself and I’ve been making friends. It’s been nice.”