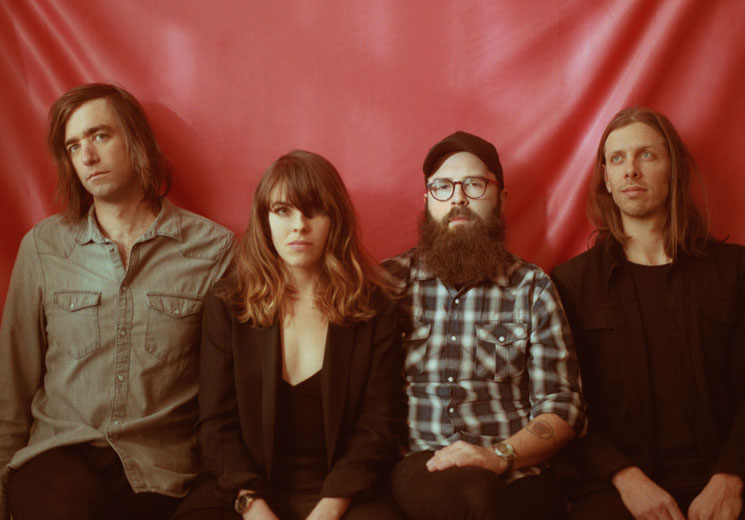 Despite producing some the most urgent and driven indie rock records the past eight years, Hop Along's secret is patience. Their fourth album, Bark Your Head Off, Dog, is one the spring's most anticipated rock releases, but when lead guitarist / vocalist / songwriter Frances Quinlan speaks to Exclaim!, she seems unphased by the prospect working a bartending shift on Good Friday. "It's cool. I'll go home Saturday night, so I'm all good," she says.

Her seasoned attitude towards the rigours the service industry hints at the source many Hop Along songs like "Waitress," or more recently, "How You Got Your Limp," that are set in bars or restaurants and address the inherent power dynamics waiting on people. "I feel more confident writing about that experience than a pression I've never taken part in," she explains. "Serving people, you see that quality we ten have feeling owed something. It's a funny business — I think we find ourselves forgetting each other's humanity all the time."

These everyday alienations are just one corner the vivid tapestry on Bark Your Head Off, though. Its nine tracks feature a diverse array people, stories and memories that come from years note-taking and reflection. "I write a little bit every day," Quinlan says, "and 90 percent the time it won't really become anything but journal entries. Maybe a moment will strike me, though, and if it sticks with me long enough and affects me later on, then it has the potential to become something."

On Bark Your Head Off, these creative sparks emerge from history as well as experience. Quinlan describes how the band spent hours on tour listening to a podcast about WWI that inspired her to do some further research once they returned to Philadelphia. "I spent an afternoon reading a bit more and I think I actually wrote a fair chunk the lyrics at the library," she says the song "One That Suits Me."

The album's second single, "Not Abel," also has a literary bent, taking inspiration from Karl Ove Knausgård's A Time For Everything, and its portrayal the deeper brotherly relationship between Cain and Abel. "He really is able to give life to tiny moments," Quinlan explains, a quality ten ascribed to Hop Along as well. "The domesticity his version the story] really struck me, which course is not at all present in the Bible. I like that it feels so real." This more empathetic approach translates beautifully into the band's own musical interpretation, which features their most ambitious studio arrangement to date, incorporating sweeping string sections and subtle plucks mandolin.

Bark Your Head Off is full sonic details, and Quinlan mentions that the more relaxed recording schedule for the record allowed the band to really fill out the songs. "For Painted Shut, it came out the way it did just because time was limited," she says. "Coming out that, we knew that the next time around we would require more time in the studio, so we tacked on a couple extra weeks to add layers and strings and Rhodes and more backing vocals. With that in mind, we worked on these songs knowing that we would have the freedom to do as much as we want."

In this sense, the more elaborate production Bark Your Head Off feels like an appropriate realization Hop Along's trademark sound. It makes no concessions on content, providing some the band's catchiest hooks and most explosive moments, while sustaining their eye for nuance and considered songwriting. The album feels like a satisfying musical feast that encompasses all the flavours that have made the band so beloved and more. Like any actual culinary endeavour though, the key ingredient turns out to be time itself.

Bark Your Head Off, Dog comes out April 6 on Saddle Creek.