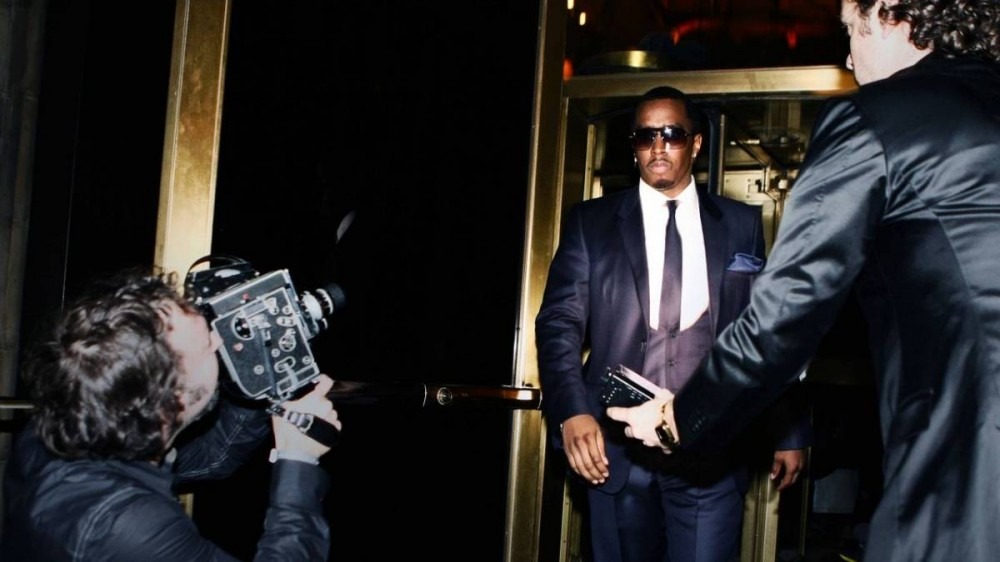 But before Powell came along, trailblazing Hip Hop photographers such as Ricky Flores, Martha Cooper, Joe Conzo, Janette Beckman and Glen E. Friedman had already laid the foundation, allowing numerous talents to follow in their footsteps.


Photographer T. Eric Monroe, who got his start at Thrasher Skateboarding Magazine before landing at The Source, captured countless pioneering figures in ’90s Hip Hop — from The Notorious B.I.G. and Tupac Shakur to Nas and De La Soul. At the time, the future legends were just getting their feet wet and Monroe was able to immortalize those early days.

“I still approached it as if I was hanging out with my friends,” Monroe tells HipHopDX. “I didn’t insert myself into the picture, but rather it was just me capturing what was going on and the essence of the beauty of the various different moments. Because everyone was so young — I don’t want to say innocent — but for the most part, they didn’t know what they’re walking into within the music industry.

“They had passion, they had drive, they had determination. You could see it in their eyes that they weren’t going to be stopped. And there was no social media or internet. There was nothing to influence them like, ‘Oh, if I do this, it’s going to equate to that.’ Yeah, you want to get on, you want to sell some records so you can create a better opportunity for your family. That’s what it was about.”

Similar to the Hip Hop community, the photography community is intertwined. Monroe knew Powell, Powell knew Beckman, Beckman knew Conzo and so on. Naturally, when Powell died of suspected congestive heart failure at 56, it was jarring to say the least. In fact, Monroe had just spoken to him in the weeks prior.

“When he found out later that I had done photography and all this other stuff, his eyes were like, ‘Wait, what?’ It blew his mind because I wasn’t … normally, when another photographer finds out you’re a photographer of celebrity nature, there’s a certain fandom that comes with it. I never gave him that fandom. But when he found out what all I had done, our level of respect for each other was at a higher level where we didn’t talk photography. We didn’t talk music. We knew we didn’t have to put on certain characters with each other.”

In 2021, there are a handful of photographers who’ve continued to carry the artform forward and capture more contemporary Hip Hop and rap artists — from Cam Kirk and Jonathan Mannion to Gunner Stahl and Sharief Ziyadat. Even Los Angeles-based photographer Estevan Oriol, who rose to notoriety capturing L.A. gang culture, keeps his finger on the pulse.

HipHopDX has decided to shine a light on Kirk, Mannion, Stahl, Oriol and Ziyadat who’ve all used their lens and artistic eye to push to culture to new territories while respecting their pioneers.

Yonkers, New York native Shareif Ziyadat has been on the non-stop grind since graduating from the School of Visual Arts in New York City in 2002.

As the creative force behind Shareif Ziyadat Productions — an in-house art production company enabling clients to “bring a project from conception to completion” – Ziyadat has photographed hundreds of celebrities, including Hip Hop artists such as Nas, Swizz Beatz and Wyclef Jean. He’s also worked as Diddy, 50 Cent and JAY-Z’s personal photographer, capturing the Hip Hop titans at numerous events across the globe.

But despite Ziyadat’s monumental success, the 40-year-old photographer and graphic designer never forgets where he came from.

“I honor the legendary photographers before me by committing to preserving their legacy and continuing to capture iconic Hip Hop moments from my era,” Ziyadat tells HipHopDX. “Each generation has a unique story to tell, so I wanted to follow in the footsteps of those before me, document the narratives of today’s artists and deliver timeless visuals that will stand the test of time.

“I personally never had any influences or mentors, so I customized a blueprint and created a lane that worked for me to succeed as a photographer in the Hip Hop industry. My passion was always to create and capture unforgettable moments and that’s what drove me. With that said, there are several phenomenal photographers who paved the way for me and I’m truly grateful for them.”

For Los Angeles photographer Estevan Oriol, he became entranced by the glamourous yet gritty city’s gang culture and has built a portfolio around stunning black-and-white (and of course, color) images of nefarious gangbangers, lowriders, tattoos, celebrities and Hip Hop artists.

Starting off as a Hip Hop club bouncer, Oriol eventually linked up with Cypress Hill and House Of Pain who employed him as their tour manager. While traveling the world, he was bit by the shutterbug and hasn’t stopped shooting since. Oriol’s work often centers on the lives mainstream society has left behind or would rather ignore and grants them an unparalleled beauty rarely captured by the naked eye.

“My first photos come from lowriders and Hip Hop,” Oriol tells DX. “Before me, pioneers that I knew their photos and names here in Los Angeles were Glen E. Friedman, Brian Cross aka B+ and Block. They were shooting L.A. culture and I came in the next wave.”

From Kanye West, Eminem and The Game to Snoop Dogg, Dr. Dre and Nate Dogg, Oriol’s extensive client list has made him a celebrated figure in the culture. In 2020, Oriol and renowned L.A. tattoo artist Mister Cartoon were the subjects of a Netflix documentary called L.A. Originals, which Oriol also directed. With a focus on their Latino roots, the film brought their stories to life with commentary from Eminem, Snoop and the late Kobe Bryant, among others.

At just 31 years old, Maryland native Cameron “Cam Kirk” Kirkland has already amassed a healthy list of clients — from Lil Baby, DJ Khaled and 2 Chainz to T.I., Future and ScHoolboy Q. While studying business at Morehouse College in Atlanta, he decided to turn his passion for photography and videography — something he’d picked up from his father — into a real career and dove in headfirst.

As he explained to Hypebeast in 2017, “The transition actually started when I linked up with Metro Boomin in 2012. We focused heavily on photography and Instagram had just started. My initiative was to push Metro’s image out there — the guy everyone could recognize for his style on Instagram. We ended up doing weekly photo shoots and that helped me come up as a brand of the ‘photographer in Hip Hop’ in a time when everyone wanted to be a ‘videographer in Hip Hop.’”

In 2016, Kirkland dedicated an entire exhibit called Day 4 Exhibit to the late Bankroll Fresh with the help of Metro Boomin, Sonny Digital and Southside as a tribute to their fallen friend. Since then, the ever-expanding exhibit has paid homage to 21 Savage, Lil Yachty, Rich The Kid, Migos, Trouble, DC Young Fly and 6LACK.

Last November, Kirkland launched a new Instagram series called Behind The Cam, which finds the seasoned snapper detailing various photo shoots. In the most recent one, published on Friday (February 26), Kirkland talks about the first time he photographed Lil Baby.

Album cover extraordinaire Jonathan Mannion was raised in Cleveland, Ohio and graduated from Kenyon College with honors. As soon as he had his diploma, he was ready to take flight, moving to the Big Apple in 1996 where he was almost instantly commissioned to shoot JAY-Z for his Reasonable Doubt debut.

Since then, the 50-year-old has shot over 300 album covers for artists such as Nas, the late Aaliyah, Kendrick Lamar, Dr. Dre and Outkast. He was also the creative genius behind the Beats By Dre “Straight Outta” campaign, which could be found anywhere from high-end boutique clothing stores to middle-of-nowhere gas stations in Iowa.

More recently, Mannion shot the cover images for Gucci Mane’s 2016 project Everybody Looking, DJ Khaled’s 2017 album Grateful and Ella Mai’s 2018 self-titled album. But as he pointed out in a 2011 interview, he’s just a “messenger” and simply happy to contribute to the artform like his former mentor and famed photographer Richard Avedon.

“I’ve been given a talent to document an extremely important era of music history,” he said at the time. “I have a love for Hip Hop that goes back to when I was a teenager, and I feel blessed to have had the chance to shoot the artists I’ve worked with. I’ve had the opportunity to grow with them and the photos I’ve shot over the years have become visual bullet points of their creative evolution and mine.”

But as he admitted in a 2019 interview with Red Bull, he quite literally stumbled into it.

“I bought a camera for my 18th birthday,” Stahl said. “There wasn’t a driving factor [for getting into photography]. I was just bored and didn’t know what to buy for my birthday.”

Like anything else, it was a learning process – and an often painful one. In Stahl’s 2019 book Portraits, he recalled shooting 21 Savage for the first time and forgetting to remove the lens cap from his camera, resulting in the photos being “straight black,” a devastating blow for the aspiring photog. Needless to say, he’s overcome any obstacle in his way, emerging as one of Hip Hop’s most ambitious young photographers.

There are a slew of charities geared toward photography, including San Francisco’s First Exposures, a youth mentorship that celebrates inclusivity for all races, genders and sexuality identities and hold no bias based on immigration status, and 100 Cameras, which gives a platform for children from around the world to sell their photographs and  tell their stories.