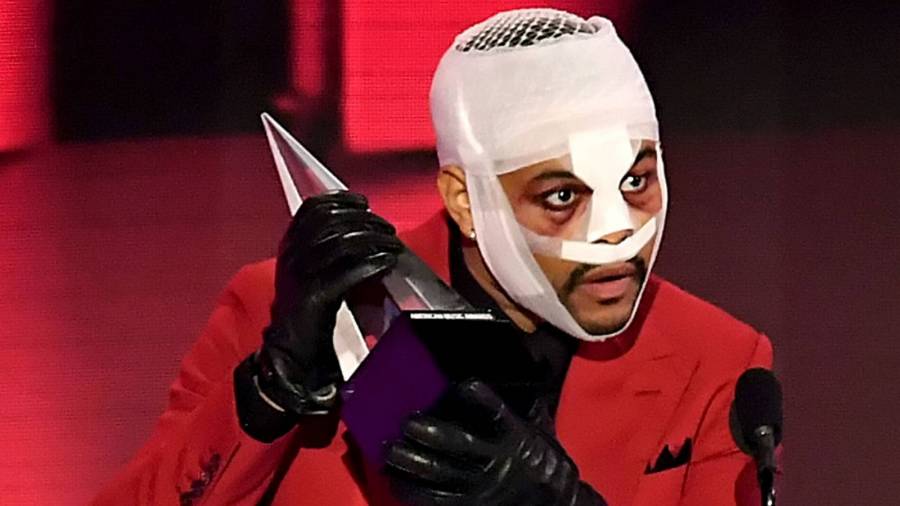 Los Angeles, CA – The American Music Awards (AMAs) took place at the Microsoft Theater in Los Angeles on Sunday night (November 22). With everyone dressed to the nines, one particular artist stood out like a sore thumb — The Weeknd.

As the Canadian crooner sauntered up to the stage to accept his award in the Favorite Album — Soul/R&B category for After Hours, people couldn’t help but stare at the white bandages enveloping his face and two black eyes. He continued to cause concern when he performed “In Your Eyes” and “Save Your Tears” in the same getup.

.@TheWeeknd performs “In Your Eyes” & “Save Your Tears” at 2020 #AMAs. pic.twitter.com/MpofjlvUjO

But The Weeknd hadn’t been injured at all. In fact, it was all an elaborate stunt to highlight the short films he made for the singles “Blinding Lights” and “After Hours.” The 30-year-old singer, instead, was sending a warning to people about drunk driving — and illustrating what kind of injuries can happen when driving drunk.

As part of his AMAs acceptance speech, The Weeknd dedicated his win to the late Prince, saying, “Last time I received this award, it was given to me by the late great Prince. And you know, he’s the reason I get to constantly challenge the genre of R&B, and I’d like to dedicate this award to him. Thank you.”

The Weeknd was captured with bandages on his face earlier this month while shooting a music video, leading his fans to believe he may be dropping the new video soon.

Until then, revisit the visual for “Blinding Lights” below.