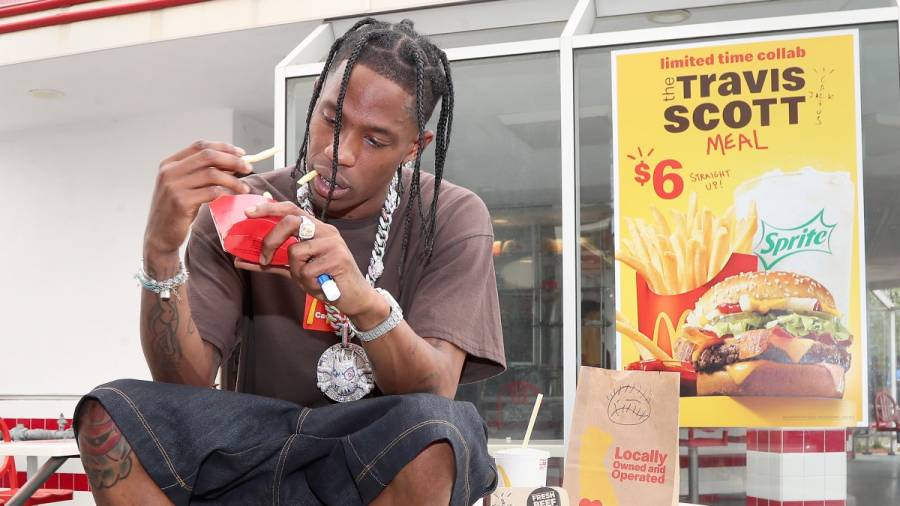 Without releasing an album in the last two years, Travis Scott has solidified himself as a force in the brand partnership space. In 2020 alone, he’s notched lucrative deals with Epic Games, McDonald’s, Mattel and PlayStation to name a few, which has companies rushing to his doorstep to join forces in exchange for millions of dollars.

A Forbes feature released on Monday (November 30) attempted to uncover exactly how much money Scott is raking in from his new business ventures. La Flame’s deal with McDonald’s in September was a huge hit and nearly caused a supply shortage at some of the fast-food giant’s restaurants. Scott is estimated to bring in $5 million from McDonald’s and $15 million in Golden Arches-branded merch sales.

The Houston native has became a prominent influence in the sneaker community. Forbes says he takes $10 million in from Nike to design his signature kicks, but is worth a lot more to the brand with his presence. It’s similar to the path of Kanye West’s work with Nike before he took his talents to Adidas to build a billion-dollar empire.

For his latest partnership, Scott is teaming up with Sony for the promotion of their PlayStation 5 release. His role as a creative consultant in the company remains to be seen, but he did star and voice a commercial for the videogame powerhouse. they also gifted him the PS5 over the summer to make him one of the first to try out the fresh console.

Scott has reportedly netted $1 million from Sony, but his value lies in what’s possibly ahead. A Forbes source expects the multi-year contract to have Scott to earn upwards of $20 million with a “co-branded console” and possible “Travis Scott videogame” in the future. Overall, he’s going to rake in north of $100 million through corporate partnerships and branded content by the time 2020 expires.

Other tidbits from the feature tease Scott’s forthcoming Utopia album, which is tentatively scheduled for a 2021 release. Cactus Jack also has a Cacti hard seltzer on the way. He’s continued to bolster his résumé in 2020 with another Billboard Hot 100 No. 1 thanks to “THE SCOTTS” with Kid Cudi and he contributed to Christopher Nolan’s Tenet soundtrack.