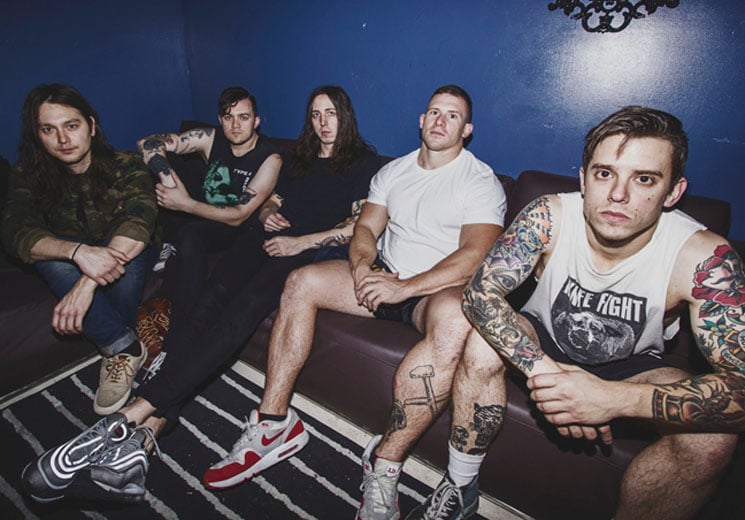 Back in 2006, Bo Lueders, James Pligge, Chris Mills and John Hfman were playing in a straightedge hardcore band called Few and the Proud when they decided it would be fun to start a powerviolence side-project in the vein acts like Charles Bronson and Infest.

“We thought it would be really cool to have James sing, so pretty much after Few and the Proud practices, we’d just jam and write songs,” says drummer Chris Mills. “We ended up doing a seven-inch and the seven-inch did fairly well, so we just kept going from there.”

Early Harm’s Way material, such as the Imprisoned EP, had a very low-fi quality to it, delivering blisteringly fast rhythms and straight-to-the-point aggression in short bursts. While the material was rough around the edges, people started to pick up on the band as they recorded more demos and EPs, which eventually led to the group’s first full-length record, Reality Approaches. One year later, bassist John Hfman departed to focus on powerviolence act Weekend Nachos as well as his other projects.

“We’re always doing multiple projects at one time and Harm’s Way just slowly became a more serious band as it gathered more steam and more attention. I would say Harm’s Way] became its own thing and a very serious project for us with the release the No Gods, No Masters seven-inch, and that was when John had left the band and it was just Bo, James and I,” says Mills.

Over the past few years, a lot hardcore acts, such as Code Orange and Turnstile, have been melding hardcore with more accessible-sounding genres such as nu metal and alt-rock. This wave hardcore bands created a new appeal to the genre, drawing in larger crowds. For Mills and the rest Harm’s Way, reaching as many people as possible through their music is a huge goal theirs — “whether it’s the metal world, the hardcore world, the industrial world, whatever it might be.”

Posthuman marks a big moment in the band’s history, not only through their developing sound and new label Metal Blade, but also with the addition bassist Casey Soyk and second guitarist Nick Gauthier. “Casey is a multi-instrumentalist and very much familiar with our discography. It was a very natural question for us to ask him to do those tours and join the band,” says Mills.

Posthuman comes out Feb 9 on Metal Blade. Harm’s Way play in Toronto (Feb 18) on their upcoming tour with Ringworm, Vein and Queensway.