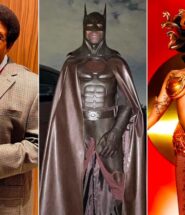 Not even the pandemic could cancel Halloween. Celebrities went all out once again, dressing up in scary, strange, and extravagant costumes while throwing socially-distant celebrations.

Ciara paid homage to some of her favorite female rappers including Nicki Minaj, Cardi B, and Megan Thee Stallion. She and her husband Russell Wilson also recreated Busta Rhymes and Janet Jackson’s iconic “What’s It Gonna Be?!” music video, which got the stamp of approval from Busta and Janet.

Lil Nas X broke the internet with a tribute to his idol, Nicki Minaj. The “Old Town Road” rapper, who once went by Nas Maraj on Twitter, turned heads with his eye-popping outfit, complete with pink wig and thick ass.

Not to be outdone, The Weeknd was almost unrecognizable as the Nutty Professor. He documented the painstaking process of being made up and even showed off his moves while dancing to his own music at Kendall Jenner’s birthday party.

Cardi B turned her followers into stone as Medusa with a snake’s body, while her husband Offset channeled Jim Carrey’s character from The Mask. Their daughter Kulture also got in on the fun, dressing as Wonder Woman.

Fabolous and Emily B upheld their annual family costume tradition, dressing as characters from “The Wizard of Oz.” Remy Ma, Papoose, and their daughter turned into a zombie family.

Travis Scott transformed into Batman, emerging from his bat cave in uniform. Normani showed off her fierce Catwoman look, Tyga went as the Tiger King, and Ryan Destiny nailed her Lauryn Hill outfit.

Saweetie and Quavo coupled up as Marvel Comics’ Mystique and Beast, painting themselves in all blue. Janelle Monáe showed off multiple looks, including the fly from Mike Pence’s vice presidential debate with Kamala Harris, complete with her own publicist.

Click through the gallery below to see highlights from Halloween 2020.