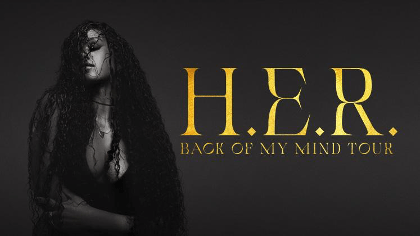 H.E.R. has announced a new leg of her enormously successful BACK OF MY MIND tour, which will kick up in 2021. Beginning April 8 in Honolulu, HI at the Waikiki Shell, the “Damage” singer will embark on a 19-city tour across the United States. Los Angeles, Austin, New Orleans, Minneapolis, Kansas City, Indianapolis, Charlotte, Jacksonville, and other cities will be visited during the tour.

The tour dates follow H.E.R.’s previously announced support dates with Coldplay on their Music of the Spheres World Tour, which will be her first time performing in a stadium.

“I’ve been so eager to connect with my fans this year, so it’s great to get back on the road. Being on stage fuels me as a musician and I can’t wait to feel that energy again!”, said H.E.R.

You can see the full list of dates below.

Back Of My Mind Tour Dates:

*Not a Live Nation Date