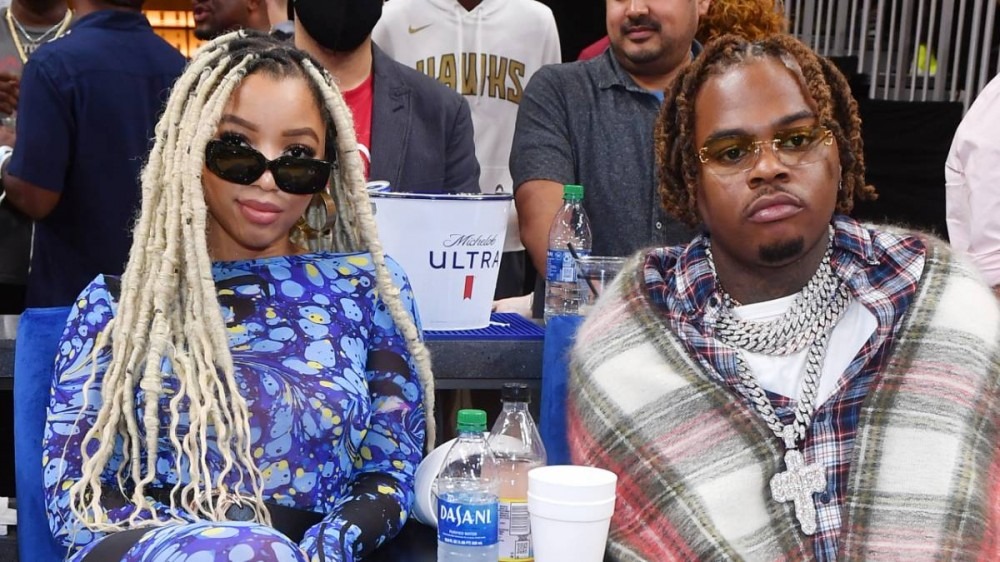 Atlanta, GA – Gunna made no secret of his crush on Chloe Bailey last month when he shared a photo from her 2021 MTV VMAs performance along with a lust-worthy caption.

“It’s the [tongue emoji] for me,” he wrote on his Instagram Story next to a photo of Chloe provocatively licking her microphone mid-performance (which the R&B singer claimed she didn’t even realize doing until she watched the performance back).

Gunna‘s unashamedly thirsty approach appears to have done the trick after the two were spotted courtside at the Atlanta Hawks vs. Dallas Mavericks game at Atlanta’s State Farm Arena on Thursday night (October 21).

The 28-year-old rapper and 23-year-old singer (who both hail from Atlanta) sat side-by-side with only a small drinks table separating them as they watched their hometown Hawks cruise to victory over the Mavs.

Gunna and Chloe Bailey both posted videos to their respective Instagram Stories during the game, but opted to show off the view from their courtside seats rather than each other. Gunna also flaunted his drip in his Instagram Story, naturally.

While there’s no confirmation of the pair being an item just yet, Gunna and Chloe’s NBA date certainly provoked strong reactions from fans, with some fawning over the “cute” couple while others were left a little bemused.

“Chloe Bailey and Gunna look so cute together,” one fan wrote on Twitter, while another quipped, “Gunna dresses like someone auntie and he pulled Chloe Bailey? The games actually rigged.”

Chloe Bailey and Gunna look so cute together. pic.twitter.com/j19WLUPnUu

Gunna dresses like someone auntie and he pulled Chloe Bailey? The games actually rigged https://t.co/WHiB3jEEiM

Gunna previously dated fashion designer Jai Nice, who he became Instagram official with in November 2019. However, the couple reportedly split last year amid allegations that Gunna had an affair with Instagram model Heather Rose.

Meanwhile, Chloe Bailey has been romantically linked to Diggy Simmons and Dutch soccer star Memphis Depay, although it would appear she’s preferred to remain single since rising to fame alongside her sister Halle as part of the R&B duo Chloe x Halle.

During an Instagram Live video in August, Chloe opened up about her relationship status at the time, saying music is her “man.”

“I don’t know if it’s the Cancer in me, but right now it’s my music. Music is my man. I come home to him every single night and I love it. He’s faithful to me … I’m in love right now with music.”

Check out more reactions to Gunna and Chloe Bailey’s Atlanta Hawks date below.

Gunna is on the verge of cuffing up Chloe Bailey??? pic.twitter.com/sFjfgsOzHY

Oh Gunna got Chloe? Slightly fat niggas wit cheese back in the lead. Right on time for the cold too