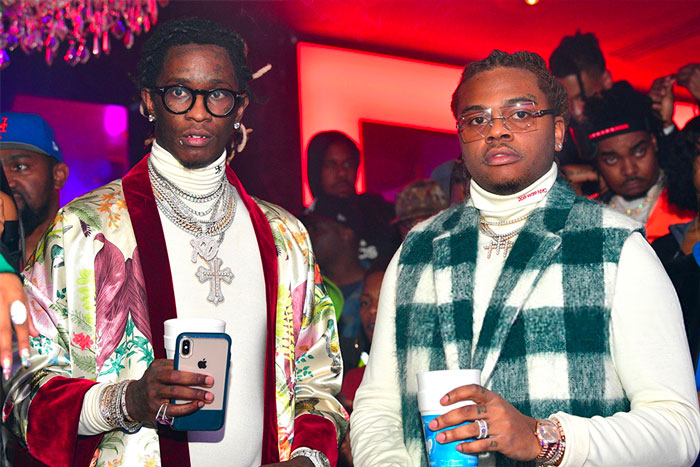 Gunna is crowning Young Thug the king of hip-hop.

While promoting his new album WUNNA, the “Skybox” rapper spoke with his mentor for Interview magazine. At one point, Thug asked Gunna who he thought was the best rapper alive, and Gunna was quick to give Thug his flowers.

“It would have to be you, Slime, on god,” he told Thug, who signed Gunna to YSL Records. “You make the most songs out of everybody. Anybody can rap and make songs but you’re making real songs. It’s hard to do that. I understand it because I make songs, too.”

Elsewhere in the interview, the YSL rappers exchanged their favorite sneakers, TV shows, cars, and jewelry. “It would have to be my Gunna piece. It’s my first name piece,” said Gunna while describing his cherished chain with pink and blue diamonds. “I went all the way with it. I ain’t never had shit so it’s something that really means a lot to me.”

Thug also asked his protégé what keeps him going. “What inspires me is being looked at as a legend, working on my craft and being acknowledged for it,” said Gunna. “The feedback from my fans, the support I get from my peers and my crew, that’s my inspo. They push me to keep going.”

On Friday, Gunna released his sophomore album Wunna featuring two appearances from Thug. The project is expected to debut atop the Billboard 200 with an estimated 110-130,000 equivalent album units.

Watch his new video for “Rockstar Bikers & Chains” below.