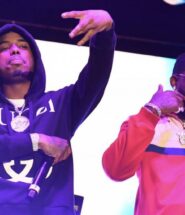 Gucci Mane was celebrating his birthday on Thursday night (February 18), but still ended the night by gifting his artist Pooh Shiesty a brand new whip to celebrate himself.

Trackhawks start at around $88,000 – and that’s without any customization, so it’s likely Gucci paid in the six figure range. (It’s chump change compared to his $1 million push present to wife Keyshia Ka’Oir, though!)

The gift commemorates the Memphis native’s debut effort Shiesty Season, which arrived on February 5 to critical acclaim … along the numbers to back it up. The 17-track mixtape debuted at No. 4 on the Billboard 200 with a solid 62,000 album-equivalent units in its first week, and featured the likes of Lil Durk, 21 Savage, Shiesty’s 1017 labelmate Foogiano, La Flare himself and more.

On February 10, Shiesty dropped the video for “See Red” off the project and it’s already nearing 4 million views in just over one week.

“It’s one of those tracks that makes you want to get in your car and just drive fast,” he said in a statement about the song.

Time to turn it up in his new Trackhawk!

Stream Shiesty Season and watch the video for “See Red” below.