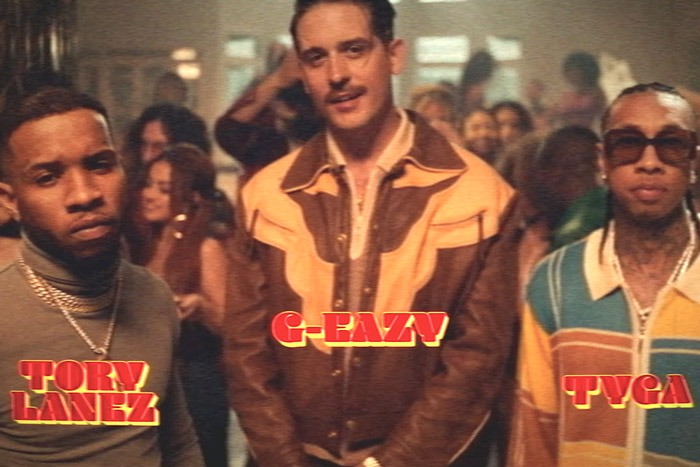 G-Eazy unleashes the NSFW video for “Still Be Friends,” his collaboration with Tory Lanez and Tyga.

The rap pack parties with stars at a lavish mansion in the explicit ’70s-inspired clip, which was released in collaboration with adult entertainment website Vixen. G-Eazy aka the “white Mike Lowrey” gets up close with his naked co-stars in a bubble bath as Tyga and Tory turn up at the topless bash. In between all the girl-on-girl action, YG also makes a cameo.

“Can we fu**k and still be friends though?” asks Tory while women twerk for the camera.

This marks the first new music from G-Eazy since his October EP Scary Nights. He is now readying a new album for release sometime this year. Meanwhile, Tyga just dropped his quarantine anthem “Bored in the House” and Tory is set to release his mixtape The New Toronto 3 on April 10.

On Wednesday, G-Eazy told fans that he cut off all his hair. He posted a photo of his new look, only to later reveal that it was an April Fools’ joke.

New month new me… Too much time at home. Don’t hate me! Stay safe yall ✂️✂️✂️