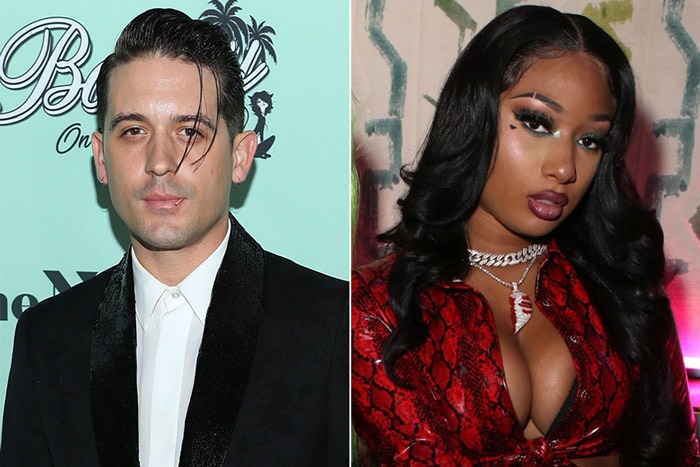 G-Eazy and Megan Thee Stallion are packing on the PDA.

The Oakland rapper, 30, and Houston hottie, 24, were all over each other during Super Bowl weekend in Miami. G-Eazy posted an Instagram Stories video of himself hugging and kissing the Hot Girl on the cheek while she wrapped her body around him. Meg was more focused on the camera, putting her arm around G-Eazy as she sang along to Roddy Ricch’s “High Fashion.”

It’s unclear if they’re actually a couple or if it was just for the ‘Gram. The video was eventually deleted. However, G-Eazy also posted a photo of Meg and captioned it with four blue heart emojis.

Megan shared the same photo on her page, prompting G-Eazy to comment with the rolling eyes emoji. She replied with two of the same emojis. She also shared an IG Story of herself taking shots with G-Eazy and their friends.

Meg was previously in a relationship with Moneybagg Yo, while G-Eazy dated Halsey before the two broke up in 2018. Over the weekend, Halsey called out a heckler who kept saying her ex’s name while she performed during a pre-Super Bowl party.

.@Halsey called out a concert-goer who kept harassing her by screaming G-Eazy’s name at her. #BudxMiami pic.twitter.com/0OPeFEY0ym

UPDATE: G-Eazy’s girlfriend Yasmin Wijnaldum has seemingly responded to the Megan Thee Stallion rumors. She posted an Instagram Story of herself soundtracked by Hitmaka’s “Thot Box (Remix),” which includes the lyrics: “But you be fuckin’ anything that walks / You got thot cock.” The video ends with her winking at the camera.

G EASY GIRLFRIEND JUST POSTED THIS ON HER STORY😭 pic.twitter.com/CFsjLGzgb9