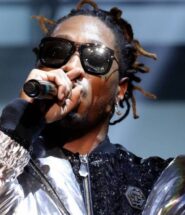 Lori Harvey may have moved on to a new relationship with Black Panther actor Michael B. Jordan, but her ex-boyfriend Future is apparently still thinking about her on some level.

On Thursday (May 20), a leaked snippet of a 42 Dugg collaboration started making the rounds in which Future appears to take a dig at Harvey by referencing her famous stepfather Steve Harvey.

“Tell that bitch Steve Harvey I don’t want her,” he reportedly raps over the grimy production.

Future and Lori Harvey broke up in August 2020 after roughly eight months of dating. Since then, Harvey’s love life continues to be internet fodder. Boosie Badazz found himself in hot water in February when he decided to throw his two cents in on the topic during an interview with VladTV.

“I think we need to stop giving the women the power with situations like this,” Boosie said. “Girls keep saying it’s ‘goals’ but this is not goals. We gotta start giving the bachelors – the men who are running through a beautiful woman like this – the credit, who not housing her, running through her. The last time I went to Diddy’s house, him and Bu was together. They dogs.

“I know Lori a beautiful woman, but we gotta stop giving the glory to the women. … What about the Futures? The Trey Songz? Who are really bending through these hoes? … We gotta start giving them the credit instead of Lori.”

Boosie then doubled down on his comments after he was criticized, saying, “FUCK Y’ALL I SAID WHAT I SAID!”

As if that wasn’t enough, Boosie then went on Justin Combs’ REVOLT TV show Respectfully, Justin a month later and compared her to a used car.

“I don’t want a car after it had eight owners,” he said. “I’m not gonna take it home and wash it the same. I’m not gonna love it the same. People was getting at me … well, in my world, we fucking. […] We’re sexually related. It’s realism. If you think we’re takin’ trips with women and and we’re going sightseeing, it’s just not there. This the real world. When we get seen with women, we’re not going to the movies.”