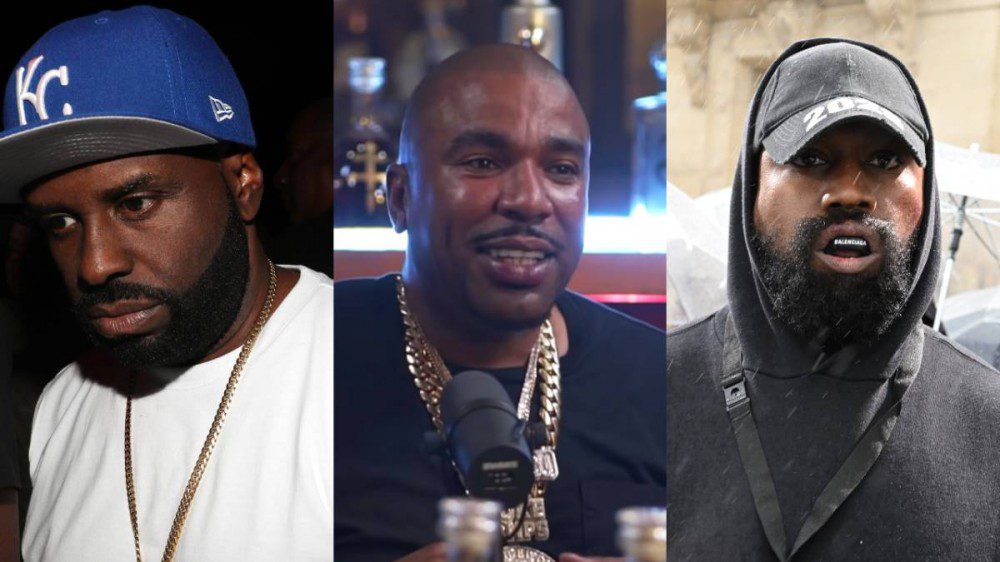 Funk Flex has shared his thoughts on the comments Kanye West made about George Floyd during a controversial interview on N.O.R.E. and DJ EFN’s Drink Champs.

The Yeezy mogul made a number of inflammatory remarks during the three-and-a-half-hour interview. He referred to rap peers like Diddy and Meek Mill as “fake hard n-ggas,” and said even more scathing remarks about “the Jewish people.”

He at one point even suggested George Floyd was killed by fentanyl, and not ex-cop Derek Chauvin kneeling on his neck for almost nine minutes, which he was eventually found guilty of doing so by a grand jury.

N.O.R.E. faced backlash for not pushing back on Kanye’s factually inaccurate and antisemitic claims, for which the Drink Champs co-host apologized before taking the interview down.

“N.O.R.E., I don’t know how I feel about the content coming down,” Funk Flex said on his radio show around the 17-minute mark. “I don’t know how to weigh in on that yet. It does bother me that it came down, but N.O.R.E. I would really like to see that re-edited and up tomorrow. That I would like, because you know what, when Candace Owens goes on a platform, it stays up. When Donald Trump goes on a platform, it stays up.”

Funk Flex then offered a call to action to Meek Mill, who has often served as an activist for criminal justice reform.

“Meek, I wanna see you Meek,” Flex said. “Not just Meek, I’m just using Meek ’cause he called Meek out. I wanna see artists stand by George Floyd and get to that social media.

“You don’t even have to mention Kanye but you know why you don’t post that? Because you know that means you against Kanye without saying you’re against him, and you’re scared of him, or you wanna make money with him. And guess what, Kanye knows that.”

Elsewhere in the interview, Flex had called out rappers in particular for refusing to speak out.

“I know the rappers [are like], ‘Well, we don’t wanna give it any fuel.’ You’re a liar! You rappers are liars! All you have to do is really say your thoughts without mentioning Kanye’s name, but you don’t because you might do business with him down the line, you want a feature,” Flex said. “I have not seen one person tied to his label, signed to his label, who has a feature, anybody that works in his office say anything that what Kanye said was bananas.”

In an interview with Hot 97 on Monday (October 17), N.O.R.E. called the fallout from his Kanye interview a “learning experience.”

“I’m sorry,” he said. “I can sit there and say, ‘That’s only Kanye West, it’s only what he said.’ But I have a responsibility when I have an audience … When I watched myself, I was embarrassed. I was like, ‘Wait a minute? You just let him say that?!’ I’m irresponsible for letting it go.”

Kanye’s Drink Champs interview is just the latest in a string of controversial interviews the Chicago rapper has given these past few weeks. He most notably sat down for an interview with Fox News earlier in October where he made more claims about Jewish people, and spoke about the controversy behind his White Lives Matter t-shirt, which he debuted during the YZYSZN9 fashion show at Paris Fashion Week.

Reports have also emerged that Kanye allegedly professed his love for Hitler and the Nazis during his infamous rant at the TMZ offices in 2019, which spawned an invitation from the Holocaust Museum in Los Angeles. They asked Ye to come down to the museum and educate himself on Jewish history.

“Words matter and words have consequences Ye,” the museum wrote in a statement on Instagram. “We urge you to come visit us at Holocaust Museum LA to understand just how words can incite horrific violence and genocides.”