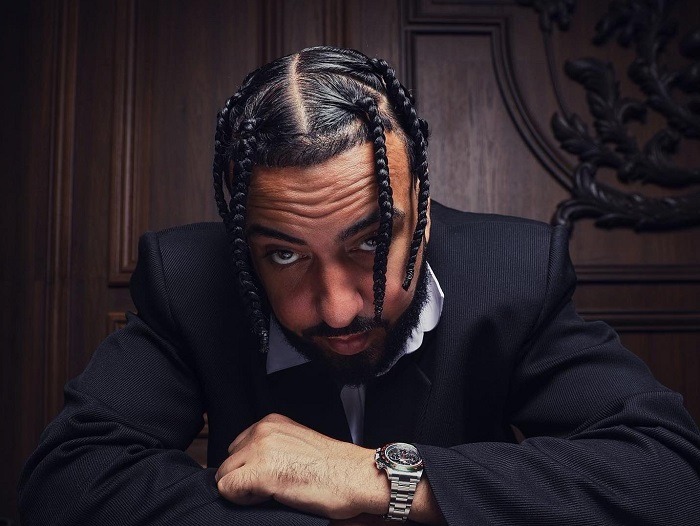 French Montana is showing off his latest timepiece. Hitting Instagram, French showcased a custom Rolex Daytona. The watch was created alongside Skeleton Concept and there are only 60 made.

MANN this ain’t regular,” French wrote. “JUST DROPPED MY own skeletonized Rolex Daytona 116520 timepiece is out now ! Only 60 made ! THE FRENCH MONTANA CONCEPT A tribute to my origins – made by the incredible @skeletonconceptofficial atelier. The perfect melody to my wrist. #SkeletonConceptXFrenchMontana #thefrenchmontanaconcept.”

According to HipHopDX, the new watch has a red and green colorway highlighting French’s Morrocan roots. Also included is the Arabic numeral digits, also saluting his North African heritage.

Last week, French Montana held a private dinner and plaque presentation at his home to celebrate receiving the RIAA’s coveted rare diamond award for his 2017 smash song “Unforgettable,” featuring Swae Lee. He now has the distinction of being the first male artist from the South Bronx and the first artist born in Africa to receive diamond certification.

He recently launched the summer with the much-praised tape, Montega, featuring Harry Fraud. As a result of collaborating with the renowned and well-respected producer, it received millions of streams almost immediately.

On Thursday, August 25, the GRAMMY Museum in Los Angeles will host the official debut of French’s new joint venture, NAQI Healthcare, in collaboration with Guardian Recovery Network. Through in-home and private accommodation detoxification services for clients in Florida, New York, Texas, and California, NAQI wants to increase access to addiction treatment for clients who value their privacy, with future intentions to extend program availability to clients across the nation. NAQI is donating 10% of all profits to MusiCares. MusiCares, a 501(c)3 organization run by the Recording Academy, has helped millions of musicians in need by providing them with medical, financial, and rehabilitation assistance.