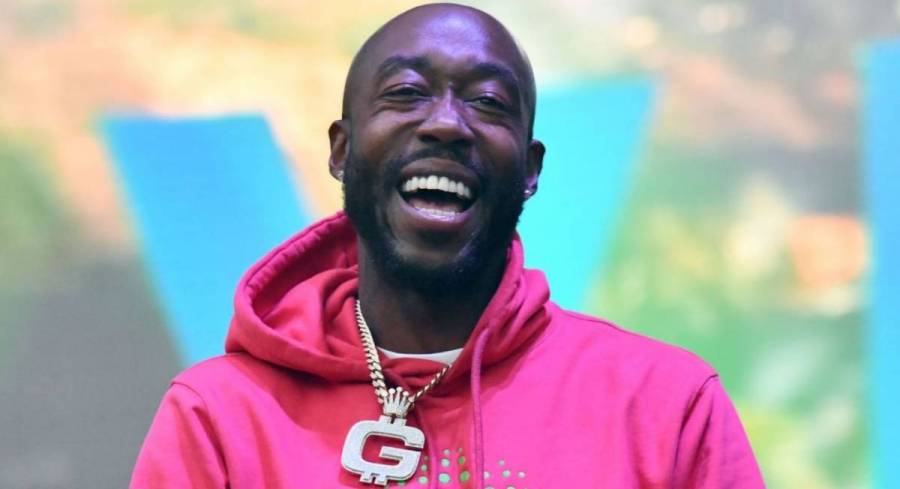 Freddie Gibbs’ social media feeds are typically full of lighthearted humor, promotional ephemera for whatever project he’s working on and the occasional jab at DJ Akademiks. But on Sunday (April 25), a video he posted via Twitter backfired and had his mentions blowing up with criticism. The since-deleted clip in question showed a Holiday Inn Express employee seemingly having a meltdown on the job.

The customer fired back, “So why did you get mad and hit the computer?” From there, the employee violently punched himself in the head before picking up the computer and smashing it over his own head. Gibbs wrote in the caption, “Somebody make sure this white boy don’t have a gun.”

As cries of “cancel Freddie Gibbs” started making the rounds, Gangsta Gibbs wasn’t going down without a fight. Although Gibbs did delete his original tweet — which he initially said he wasn’t going to do — he was armed and ready with several rebuttals.

“Cry me a river bitch,” he wrote in response to the outrage. “I don’t tell grown men to shut up unless I plan on knocking they teeth out. Who’s next? I love pissing fake woke Twitter off y’all never do shit in real life.”

Cry me a river bitch.

I don’t tell grown men to shut up unless I plan on knocking they teeth out. Who’s next?

Freddie Gibbs then called out the perceived hypocrisy in relation to another video he posted, adding, “I posted a group of naked bitches fighting and ain’t none of y’all check on they mental health.”

But people were still ready to argue, writing things such as, “Nah but like the guy in the video was clearly having a mental breakdown” and “You comparing a service worker who finally had his breaking point to a bunch of wild bitches fighting over nothing. Crazy.”

I posted a group of naked bitches fighting and ain’t none of y’all check on they mental health.

But Gibbs was undeterred and made sure to let his roughly 455,000 Twitter followers know he wasn’t letting the negativity get to him.

“Mood all day bitch,” he wrote alongside a clip of a kid breakdancing.

To be fair, Freddie Gibbs has publicly shared some pretty outrageous things about his life that outweigh a clip of someone having a breakdown.

During a February appearance on The Joe Rogan Podcast, Gibbs casually mentioned he’d once shot a “crackhead” nine times as they were discussing the illegality of cocaine and why .45 caliber bullets exist.

“You know this is some real shit because there was a crackhead back in the day,” he said. “I shot the n-igga nine times with a TEC-9 and he kept running down the alley.”

Several people were quick to point this out on Twitter, with one person writing, “It’s funny that freddie gibbs saying he shot a crackhead 9 times was memed but him posting a video of someone going through a bipolar episode is what gets him cancelled.”

THAT’S what it took for y’all to realize that Freddie Gibbs was a lame??? pic.twitter.com/GduLTv6g7x

seeing freddie gibbs make fun of a mentally ill worker getting bullied by a homophobe and then act like he’s being cancelled for criticism is disappointing as fuck. grown ass man with the sense of humor of a 14 year old with ifunny

HAHA! LOOK, THIS GUY’S HAVING A MENTAL HEALTH CRISIS! BETTER MAKE SURE HE DOESN’T HAVE A GUN! ISN’T IT FUNNY? WHY AREN’T YOU LAUGHING GUYS? GET IT, HE’S SUFFERING FROM A MENTAL ILLNESS AND I’M MOCKING HIM FOR IT! I’M THE REASONABLE ONE! https://t.co/JCYzbtT2RI pic.twitter.com/aZ2gbVe2tq

I hate cancel culture with a passion, but people like Freddie Gibbs and Tariq Nasheed are few of many cancerous people who deserve to be cancelled.

Um excuse me mr. Freddie Gibbs sir, you are “cancelled”

Also no shit this is what gets him cancelled. He’s making fun of a mentally ill person getting bullied. His race is not at all relevant, IT’S A PERSON WITH A DISABILITY GETTING BULLIED TO THE POINT OF HAVING A BREAKDOWN. I couldn’t give a fuck if he’s posted videos of people

Expelled for not going to classes and losing a scholarship, 38 yo man arguing with teens on the internet, got dropped from Interscope after attempting a shitty album that got cancelled, and a proud drug dealer and murderer.
What an inspiration lmao wish I had that life

So why is Freddie being cancelled ? For his valid opinion on what he observed? This kid should never have a gun. That is a fact .