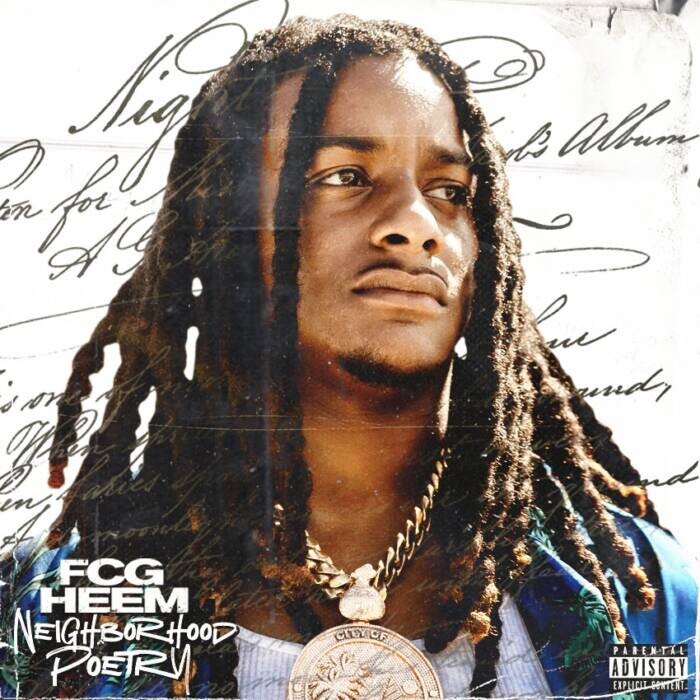 He heralded the release with standout tracks “Beef” [feat. Pooh Shiesty], “Champagne Showers,” and “More Pain” [feat. Toosii]. Among other highlights, “Hood Story” [feat. NoCap] pairs haunting trap keys with vivid verses and a captivating refrain. NoCap pulls up with a stunning melodic cameo of his own as well. Then, there’s the standout “California.” Heavenly piano glows through glitchy 808s as he delivers a dynamic vocal performance. Ultimately, FCG Heem asserts himself as one of hip-hop’s hottest breakthrough artists.

Check out the full track listing below.

Beyond his prolific solo output, he also recently joined forces with LBS Kee’vin on “Hood Dreams.” Straight out of the gate, HotNewHipHop promised, “The track will leave you feeling inspired.” Meanwhile, HipHopDX recently raved, “The 23-year-old rapper has honed his ability to drop catchy bars that sometimes moonlight as hooks.”

About creating music FCG Heem said, “I’m trying to motivate the young people and give them something positive to look up to.”

About FCG HEEM:
Hailing from the rough spot of Shallow Side in Fort Lauderdale, FL, FCG Heem turns struggles into soaring melodies and hypnotic rhymes. Music found him at just three-years-old when dad brought home a karaoke machine. As a kid, he spent hours singing along, freestyling, and entertaining the family with a microphone in hand. Growing up of Jamaican descent, he would be exposed to reggae early on and developed a passion for artists such as Sizzla in addition to discovering R&B and hip-hop. Citing 50 Cent as a favorite, he carefully cultivated a singular flow. Music became serious in 2018. Fired from his job at Walmart and now a dad, he started to upload tracks to Soundcloud, beginning with “This Year.” On its heels, “Dead Weight” caught fire organically. Fellow Broward County native and Chicago Bears free safety Eddie Jackson enthusiastically evangelized and shared it online. The track perked up ears across the industry as it racked up over 224K Soundcloud plays. In between projects such as the Letter To My People EP and Street Virus EP, he signed to New Era Tha Label and 100K Management. Republic Records also took notice and welcomed him to the roster in 2020. After posting up 3 million views and 2 million streams independently and receiving the public endorsement of NFL stars Eddie Jackson, Dalvin Cook, D.K. Metcalf, Jerry Juedy, Calvin Ridley, and Lamar Jackson, he formally tells this story on his upcoming project, led by the single “Haha.”