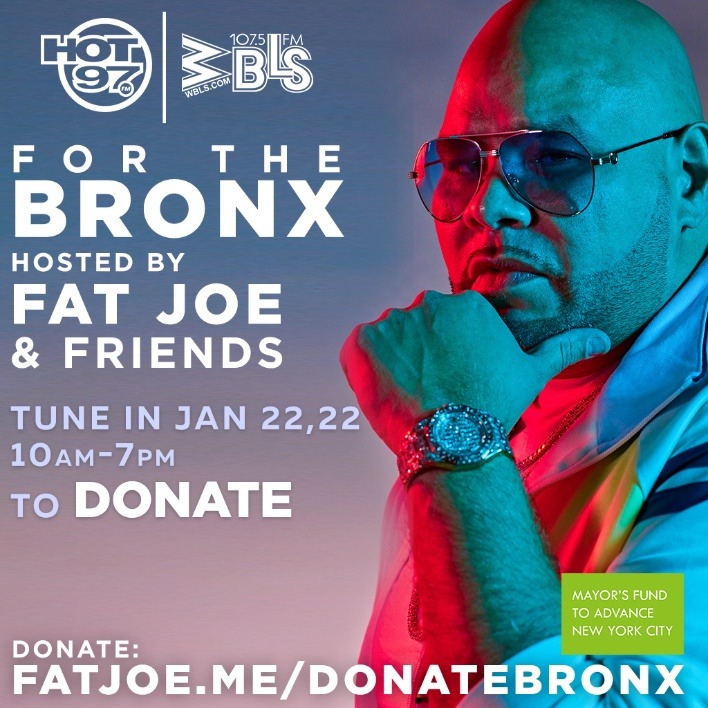 Fat Joe has stated that on January 22, he will take over HOT97 and WBLS radio stations and organize a day-long fundraiser for the families affected by the devastating Bronx apartment fire at Twin Parks North-West.

Joe will be on the air between 10 a.m. and 7 p.m. ET, enlisting the help of his celebrity friends, including French Montana, A Boogie, Remy Ma, Dream Doll, Slick Rick, B-Lovee, Bronx Borough President Vanessa Gibson, and Jeff Redd, to appear on the show and help raise funds for the victims and their families.

“I’d like to express my appreciation for my family at HOT97, WBLS and all my friends that are supporting this fundraising effort,” Joe said. “It’s critical that we continue to come together and uplift our Bronx brothers and sisters who are suffering physically, mentally and emotionally from this tragedy.”

Joe first teamed up with the New York City Mayor’s Fund to Advance New York City on Jan. 11 to establish the Bronx Relief Fund to raise money for individuals in need, particularly after the devastating fire that left 17 people dead and scores more injured and displaced.

In addition to his own donation, the Bronx native received support from friends such as Shawn “JAY-Z” Carter, Jack Dorsey, DJ Khaled, Nas, LL Cool J, and White Castle. Joe helped raise almost $1 million in the first 24 hours of the fund’s inception.

To make a contribution to the Bronx Relief Fund at The Mayor’s Fund to Advance New York City, please visit https://fatjoe.me/donatebronx and 100 percent of all donations will help impacted families and enable the distribution of emergency supplies for victims.