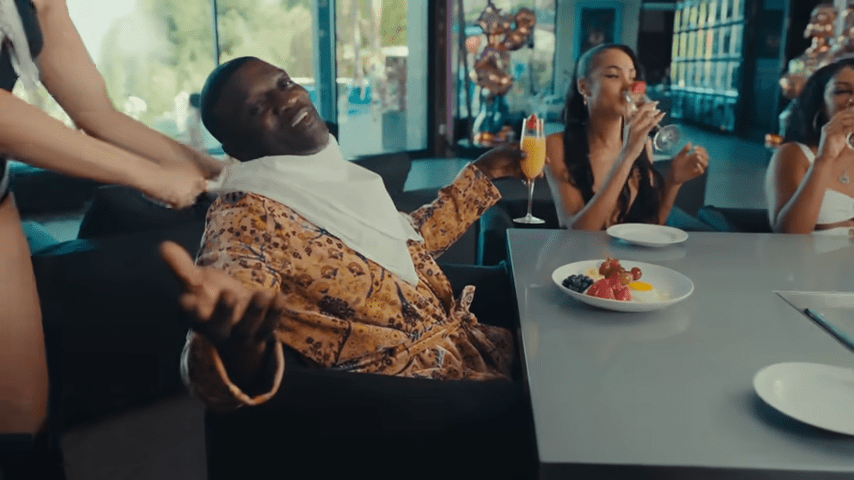 Akon is back, releasing his new single and visual “Enjoy That.” The release comes ahead of a new EP, which Akon will drop in partnership with TikTok.

The new video brings an up close and personal look at Akon’s life, bringing the spirit of Coming to America to Los Angeles. Outside of music, Akon is keeping busy, the founder of three major record labels, the rapper is currently developing his Konvict Kulture roster, bringing in hit-making Atlanta-based Ghanaian producer and musician Noble, known widely as Nektunez.

Speaking with The Source, Akon highlights what’s next in his career, why Nektunez was the proper choice for his label, and more.

The first thing I want to do is a wellness check. How are you doing?

Akon: Thank you, man. I appreciate that question. I’m doing amazing, though, brother.

You just released a new single, “Enjoy That.” What went into the creation and sparked the idea for that single?

Being the game so long, man, I realized that the game for me was more about the business than it was about why I got in it in the first place once I got locked in. I was using music as a vehicle to get to the money. Before you know it, I’m caught in so many business deals. Time flew past me so fast I didn’t even get a chance to really enjoy it. You go into these tours, you visit these cities, and you’re in one day and out the next. So you never really get a chance to set foot long enough to enjoy where you are at. And you meet people, You don’t get to see them long enough. You eat the food and forget about it by the time you get to the next spot to taste their food. So I really want to take time and indulge in success this time. I said really get the passion out of it. Enjoy this standpoint when I drop these new records. So that’s, that’s what I really wanted to do, man.

In the video, we get a glimpse into your everyday world. What marks a day of fun and luxury for you?

I’m surrounded by it to the point where it’s normal now. I know in the earlier part of my career, it was a little different. Then I went to Dubai for the first time as they were building the first seven-star hotel in the world. Now we’re in like 10-star hotels, so I don’t even know where luxury stops anymore. Luxury for me is going back to the original days of normal things cause everywhere you go in the world, the people that invite you want to impress you. So they show you the most lavish things. And sometimes I just want to be simple and do normal things with normal people. To me, that’s now become a luxury.

What is a simple thing that you enjoy?

Going to the movies. Going to McDonald’s drive-through and eating, you know, drinking Cokes. Driving yourself, like without security around you.

In the video, you bring that essence of Coming to America to Los Angeles. What made you create that blend of worlds in the video?

That’s literally my life, man. A house full of women that just take care of me. It’s that typical rich man in Africa living. You are surrounded by beautiful people that you love. They take care of you. It is kind of more so back in the day when kings had a certain lifestyle, and they didn’t really lift their hands or feet for nothing, you know? It was more like a depiction of a past-day kind of royalty to an extent. But locally today, with the state of mind of what’s happening today. It was literally that little window of what happens in my life.

You have an EP on the way, which is a partner release with TikTok. What opportunities do you unlock by choosing TikTok as a partner?

TikTok has been very instrumental in breaking a new act and showcasing brand new talent that normally wouldn’t get the exposure if they were just trying to look out for deals with major labels and things like that. I kind of built my career out of building other people’s careers. So it helps me in a way to be able to accelerate what I want to do, and that’s given new artists opportunities. But more than anything, it also creates a brand new model of how music is being released today. I think everything is so cut up, copied and pasted to that point where you get super bored. Then there are so many gatekeepers that could prevent certain things from happening when it needs to happen now. But because of the politics of the business, it’s kind of delayed. So I think this is gonna open up the door. If this is a successful partnership with TikTok, it becomes a model that other artists can adopt and do similar types of collaborations with other social media platforms.

You just worked out a management partnership with Nektunez. What let you know that that was the next person you wanted to work with?

The idea is to create opportunities where we can literally grow, and then whoever is growing on the same level find ways where y’all can reunite. The key to success is really teamwork. As my career was built on collaborations, so you never really know if it’s the right partner until it is. For Nektunez, we’re pretty much taking over all this management and business related here in the United States and internationally. With that comes all the things that they’re attached to. So we give them the tools and the infrastructure to be able to manage all those things as well too. So, and then when of course, whenever we need something or anything on the grounds, those guys are available. Cause as you know, we’re not in the city. So you need them to handle the local things. And we handle all the international stuff, and together works perfectly.

I saw a statement from you about Nektunez and the representation of the new Africa. Where do you see that state of Africa headed next and who would you consider to be other people that are contributing to that new Africa wave?

It’s the future of where music is going. More international. More international, like global-sounding songs. That’s from both Hip-Hop, R&B, Latin, you name it, every genre. The direction I think, is also to give them a better idea of how big music actually touches people. Cause I think here in America, we’re so focused in the hood, or we’re so focused to the point of trying to get your set or your city backing you. It’s so much bigger than that. So this opens the door for them to understand the opportunity this provides you globally. The state of Africa started locally. We took 10 years to build to this level. So now that it’s globally being recognized, we can now maximize all those opportunities and kind of move forward. And the New Africa is all about marketing Africa, but how it currently is today, not marketing it from footage of a hundred years ago when we were in slavery, and there was nothing but jungles and things of this nature.

In Hip-Hop and R&B, you were one of the original introductions to African culture. How does it feel for you personally to see all the various sub-genres and new artists that are part of the New Africa sound?

That feels amazing, man. And it also reminded me of my contributions to culture. I was remembering a friend who pointed out to me how, when I first came in, battle rap was super heavy and hardcore. Hip-hop was there, and then I started kind of sing rapping, and it kind of opened the doors for most artists now to sing and rap at the same time. So that became more like an industry standard. And then, you know, when we introduced T Pain and tossed the auto-tune on him, and it started off with just a dope style that nobody was doing or hadn’t done after 10 years since Roger and Teddy Riley. But we added more to the Hip-hop style of things, and it became huge, it became the industry standard. Then you moved on to Europe and worked with artists like David Guetta and continued to expand. So with Afrobeats now being introduced after working in that for over 10, 15 years, it’s now eventually going to be a standard in cultural music for Black people. So the culture, impact, and influence we brought through the culture, I’m really satisfied with what we put in and how things catch actually kind of evolved into what it’s today.