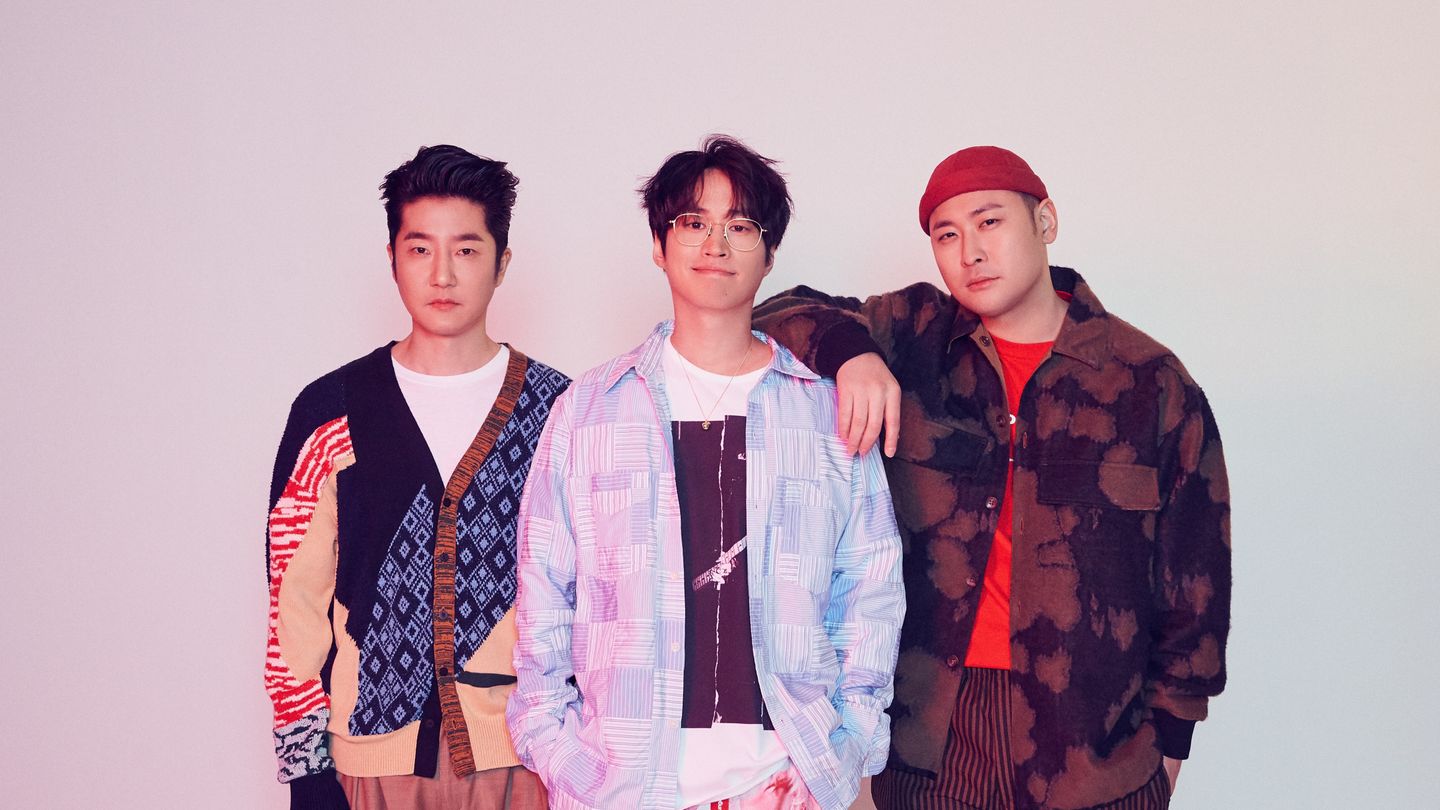 “We were anomalies when we started,” says Tablo of the Korean hip-hop trio Epik High, which he leads. A Stanford graduate whose given name is Daniel Lee, he wears a black cap and matching hoodie on the opposite end of a Zoom call, giving off a laid-back, unassuming air that belies his status as a South Korean superstar. Though rap and hip-hop have become infused in all of the country’s major pop from BTS to Big Bang to Blackpink, Epik High were genre pioneers when they formed in 2001, mixing high-speed vocal deliveries with seemingly disparate elements as punk and classical at a time when the sound was considered niche. “As time went on and other people started experimenting with different sounds in hip-hop, we became more accepted,” he tells MTV News.

Composed of Tablo, fellow rapper Mithra Jin, and DJ Tukutz, Epik High craft outspoken, socially conscious lyrics that tackle topics ranging from discrimination and class struggle to religion and politics, subjecting them to controversy and even outright bans over the years. But that raw authenticity has only fueled their success: All of Epik High’s previously released albums have charted No. 1 on the South Korean iTunes hip-hop chart. In addition to reaching No. 1 on Billboard’s World Albums chart in 2014, they became the first major Korean act to perform at Coachella in 2016.

Now the industry veterans are back with the first half of their two-part tenth album, Epik High Is Here, every aspect of which they treated like a film production. “Every song is a scene,” Tablo says, as on display in the cinematic, sprawling composition of “End of the World” and the lush portrait of contemporary society “Leica.” That strategy extends to their collaborators, which include the popular South Korean rappers Zico and CL, as well as contributions from emerging stateside talents, like the singer-songwriter Hayley Gene Penner, whose writing credits include tracks for The Chicks and The Chainsmokers. “The artists are like character actors, and we’re in the director’s chair,” Tablo adds. “We know exactly what we want for the scene and who would be the best actor to deliver that scene.”

The resulting collection is a true epic, the story of collaborations and inspirations inevitably shaped by the coronavirus pandemic, including the title itself.  But while the songs deal with somber lyrical themes of sadness, anger, and confusion, the album’s core message is one of hope — a reflection of Tablo’s belief that, if the entire world is collectively experiencing painful emotions, then it can unite in positive sentiments, too. “We’re all in the same boat,” he says. “We’re all confused, but Epik High is here for you and with you.” Speaking with MTV News ahead of the album’s release, Tablo reveals the secret to the group’s longevity, as well as his aspirations for the future of Korean rap and hip-hop as it pervades music around the globe.

MTV News: When did you start working on the album?

Tablo: It depends on the song. We had demos for “Based on a True Story” and “Acceptance Speech” about four years ago. Some of the songs are completely new — they came in a couple of weeks before we had to press out CDs. We were debating everything until the very last moment, which is normally what we do anyways.

MTV News: The word “here” comes up a lot on this album. In addition to being included in the title, it’s found in the lyrics of  “Wish You Were” and “Acceptance Speech.” Where is “here” for you, and what kind of significance does the word hold for you?

Tablo: You live in your home, but you never really think about it. It’s just where you come back after work or go to sleep, right? But we’ve had to think about each of our “here”s in a new light. And for me, I think “here” is not a fixed place — it’s an ever-changing place that is both physical and spiritual. Even when you look at the arc of Epik High’s career, “here” has changed so many times, where sometimes “here” is a very good place and we’re flying high, and sometimes “here” is the lowest of lows.

People who are ambitious are always imagining a better “here.” They want that certain job or that certain life, which means that you’re never actually thinking about the “here” that you’re living in now. I think I was probably the same way. I think I’m finally learning that my “here” is going to change day by day or even minute by minute. Sometimes it’s going to be great, and sometimes it’s going to be horrible, but it is my “here,” and I’m OK with that. So when I say, “Epik High is here,” wherever that may be, we’re OK with that. We know it’s ever-changing.

MTV News: What do you hope people will get out of this album? What’s the overall message you’d like to convey?

Tablo: I just want people to feel like someone understands, that someone is with them and is just as confused and angry as they are. If they’re angry about something, I want these songs to accompany them. Hopefully, at the end of the song, some of their anger will have transformed into something better, like courage.

I don’t want my songs to be diversions. I don’t want our music to simply be a way to get away from or ignore what’s going on. I think there are other musicians that are great at doing that. But I don’t think that is our forte, and that’s not even close to what our music is pretending to do. I want our music to reflect whatever emotions you are really feeling, because most likely we’re feeling that way too, and we really do know what it’s like. It can feel comforting to know that you’re not alone.

MTV News: Can you talk about the meaning of the titles of some of your songs?

Tablo: “Rosario” has multiple meanings, [referencing] the rosary and praying the rosary. It also comes from the Latin rosarium, which means “a crown of roses.” All of that is within the song. We’re talking about God and celebrity and dealing with your own demons. I imagined that if a Messiah figure were to come down to earth today, what would people say? I think people would attack this person, and nobody would believe them. If this person were to use a modern-day way of speaking to express their grievances, how would they do it, and how would they rap? I imagined these weird things and then put them into a song.

“Based on a True Story” is for people dealing with heartbreak. In moments of heartbreak, you want to put your attention into any story that is not your own, so you watch TV and movies and listen to songs to forget. But the irony is that everything you see or hear hits close to home and feels like your own story.

MTV News: Epik High has been around for two decades. How has the group stayed together for so long, and did you guys hit it off from the beginning?

Tablo: I think we appear to get along really well because, from the very beginning, we didn’t get along. The three of us have extremely different personalities and musical differences. From the beginning, we fought, even in public and in front of the camera. We weren’t a group that was made, and we didn’t have media training, so we had no other choice but to be ourselves. And I think that worked out because that meant that we had no “yes” men. The three of us are so hard on each other that it’s impossible to have a situation where everyone around you is a “yes” man, which I think is the worst possible thing you can do to yourself, to have everyone agree with you and pretend to love you. Musically as well, I think that’s why we’ve always been able to adapt and grow because we’re really hard on each other. We’ll shit on each other’s songs, and it just never stopped. And I think ironically that is the only reason we’re still together.

MTV News: Who are some of your biggest influences, for you and for the group?

Tablo: For the group, A Tribe Called Quest was probably the biggest influence. It’s one of the only groups that all three of us liked equally. Also, Outkast. Personally, I’ve been a huge alternative rock fan. I love Smashing Pumpkins and Nirvana. Also, growing up I was in love with The Beatles and Bob Dylan. My favorite hip-hop artist was and still is Nas. Illmatic was the first hip-hop album that I bought with my own money.

Nowadays as a group, we’re really into the Rolling Stones. We imagine performing as a group when we’re grandpas, and we hope that we’ll have the same energy on stage when we’re 90.

MTV News: Are there any artists that Epik High might want to collaborate with in the future?

Tablo: I think rap and hip-hop are the most popular genres in Korea right now by far. BTS is heavily a hip-hop group as well. The members of the group started off as hip-hop artists, and even when they’ve branched out into other genres, the way they approach lyrics has never left their hip-hop roots behind, and I think that’s why they’re so popular. Major groups like Blackpink and Big Bang have always been hip-hop-based. Now the scene is so huge that there are so many rappers and hip-hop artists that I don’t even know. It’s very vibrant.

We’ve also had a renaissance of indie and folk-rock artists, and many of them have been featured in our music. We’ve always wanted to introduce different genres and artists to our fans. We just want everyone to like each other’s stuff, because there’s no bad that can come out of that. I’m all about having people expand their circles and break down whatever barriers they may have between each other. I can’t understand why someone who loves hip-hop must hate other genres, or why some fans of K-pop idols won’t listen to other genres like Korean indie. I can understand that familiarity can be good, but I’ve never divided people into genres. I don’t see those barriers, and I don’t want our audience to see those either.

I believe that if everyone who is a fan of Korean music in one form or another can all share in this experience and get behind not just Korean music but Asian music, art, films, and culture in general, then these can do even better. We are having a moment, but I want that moment to become a movement. I really want some 12-year-old with a guitar and a unique sound somewhere in Asia to feel like the path to their dreams isn’t farther than some other kid living in Tennessee. I don’t want anyone of any race to think that their path to their dreams is farther away.