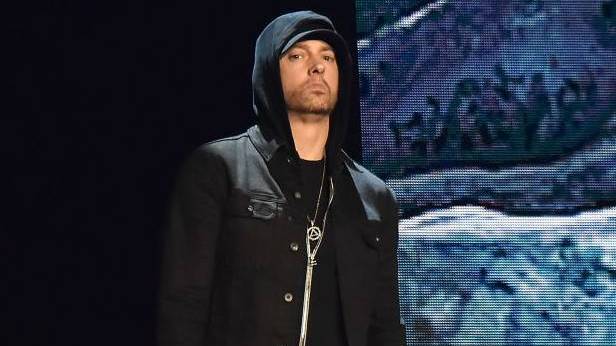 Eminem is in rare promo mode following the December 17 release of Music To Be Murdered By: Side B. Speaking to Apple Music host Zane Lowe, the sometimes elusive MC went into great detail about some of his earliest influences, favorite rappers and who he believes is criminally underrated.

When specifically asked about Nas, Slim Shady had a mouthful to say about how much he’s influenced him throughout his career.

“There’s too many moments that he had for me to even be able to count and one of the reasons that I picked ‘Halftime’ though is because there’s some rhyme schemes on there that most rappers to this day probably can’t do,” he explained. “And that’s one of the things that has made Nas so great over his career. Like when he, ‘Because when I blast the herb, that’s my word/I’ll be slaying them fast, doing this, that, and the third/But chill, pass the Andre, and let’s slay/I bag bitches up at John Jay and hit a matinee,” he was rhyming entire sentences.

“And I’m like, ‘What the fuck is this?’ Yo, Illmatic, I can’t even. Everybody knows that is a classic, essential album. I don’t know where you place that in Hip Hop, but it’s got to be at the top. It’s got to be up at the top. I’ve been inspired by so many rappers that that’s probably where I get … it taught me different flow patterns, different schemes you can do and then when you start finding your own that you feel like haven’t been done yet, that’s when it becomes fun.”

“Tupac, I feel like rappers like Rakim, G Rap, Kane, Treach, Pharoahe Monch, KRS-One would drive some new shit, it just outdid whatever was before that. And then along comes Rakim and he outdoes that. And then along comes G Rap and he starts outdoing everyone else. Redman — Redman was, to me, one of the most consistent artists. Still rapping to this day, he’s one of the most consistently dope rappers.”

But Eminem also pinpointed some of his picks for most underrated — and that list includes the late Heavy D and Main Source MC Large Professor.

“Sometimes I got to go back to and remember how great some rappers were, right?” he explained. “Heavy D. RIP to Heavy D, man. I have nothing but the utmost respect for that dude. And he was one of the most underrated rappers to me because he was like a chameleon because he could get on a song with Treach and keep up.

As far as Large Professor goes, he noted how groundbreaking Main Source’s inaugural album Breaking Atoms was and how it introduced the world to a then-unknown Nas.

“Large Professor, that’s one of the most underrated MCs of all time to me,” he continued. “Because man, that first album, that’s a classic. To me, that’s right there with the Brand New, with the Illmatic. That’s one of those albums that … a classic album to me is a album that you can play straight through.

“I think that’s probably would be my definition, one of the things that would factor in. But yeah, man, that was a play straight through album. Every song was dope. You got the beginning of Nas right there, ‘Live at the Barbecue.’ He said, ‘When I was 12, I went to hell for snuffing Jesus.’”

Finally, Em talked about what a huge influence MC Serch, Pete Nice and DJ Richie Rich — collectively known as 3rd Bass — had on him.

“I saw an interview with MC Serch recently where somebody asked him about if he thinks he influenced me and he was like, ‘Nah, fuck no, whatever, that’s bullshit,’ and that is bull because he did influence me, very heavy,” he said. “But 3rd Bass, I was very inspired by 3rd Bass. It wasn’t even just the fact that it was two white MCs, the music and the way they rapped for that time period was fucking cutting edge.

“When Serch was like, ‘The light goes, my mic blows up. The silence is now sound,’ he was doing those in-between, ‘You ain’t my nucka. Sucker, I’m snuffing.’ I paid attention to it. Those two albums taught me a lot, man. They taught me a lot and then I hated the fact that they broke up.

“MC Serch, like I said, I saw the interview and I was like, ‘Oh, come on, Serch. You got to know you inspired me.’ Serch and Pete Nice, man. I wished that they would’ve stayed together, I wish they would’ve made more albums. I wish there wasn’t the tension between the two of them and it wasn’t like that, but I’m not the one to… ain’t my call.”