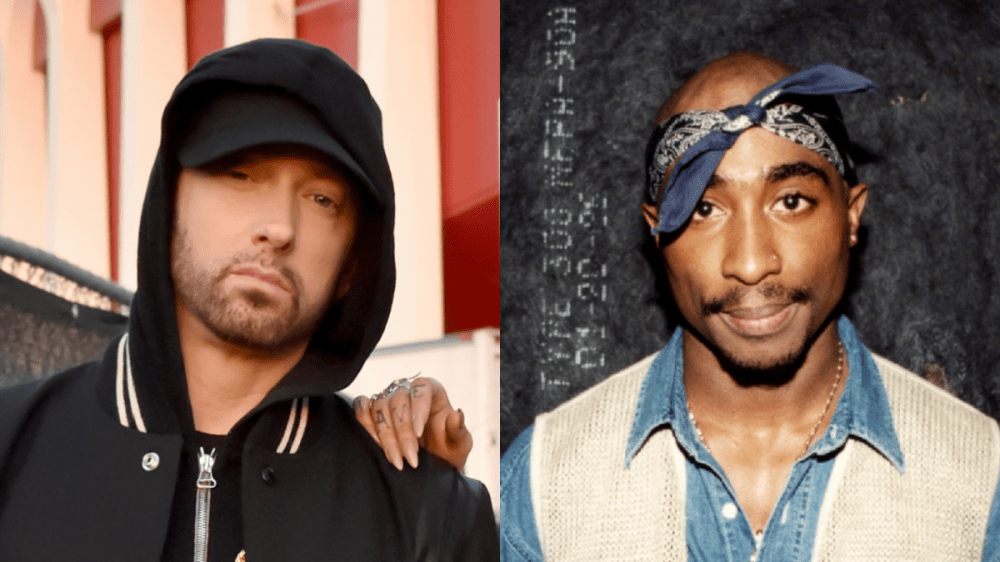 Los Angeles, CA – Tupac Shakur’s presence was felt during Dr. Dre and co.’s Super Bowl LVI Pepsi Halftime Show on Sunday (February 13) — not via a hologram, as rumors suggested, but through Dre and Snoop Dogg‘s performance of “California Love” and the Aftermath founder’s brief piano rendition of “I Ain’t Mad At Cha,” during which Eminem took a knee.

Slim Shady kept the 2Pac tribute going during his Los Angeles visit earlier this week by visiting Wake Me When I’m Free, a museum experience at L.A. Live dedicated to the late rap icon.

Created in collaboration with Tupac Shakur’s estate, Wake Me When I’m Free explores the life and legacy of the legendary rapper/activist through contemporary art, sensory technology and never-before-seen artifacts from Pac’s personal archives.

The exhibition “delve[s] into the greater meaning of his activism, music, and revolutionary art through a labyrinth of emotions, as they take this journey through his extraordinary life,” according to the official website.

“We wanted to create a memorable experience that will inspire you to be better than when you walked in, all while leaving you with the knowledge that he was a true revolutionary spirit,” said Creative Director Jeremy Hodges.

Wake Me When I’m Free opened on January 21 and has also been visited by the NBA’s Portland Trailblazers.

Eminem has made no secret of his admiration for 2Pac in the past. During his Shade45 radio show special Music To Be Quarantined By in 2020, the Detroit native hailed the late Death Row legend as “the greatest songwriter of all-time.”

“Debate what you want about MC skills and all that, because he had that, too,” he said while introducing “If I Die Tonight” from 2Pac’s 1995 album Me Against the World. “This is one of them songs by 2Pac that, to me, he was showing you, ‘I can write heartfelt shit and I can write lyrical, crazy shit, too.’

“You can’t just listen to Pac, you feel Pac. If you listen to him, you gonna feel him.”

Eminem even penned a hand-written letter to 2Pac’s mother Afeni Shakur, in which he told her, “You have no idea how much your son and his music has inspired, not only the ‘Hip Hop’ world, but, speaking for myself, has inspired my whole career.

Of course, the rap legends also collaborated posthumously, with Eminem producing 2Pac’s 2004 album Loyal to the Game alongside Luis Resto, as well as several cuts on the 2002 Tupac: Resurrection soundtrack.