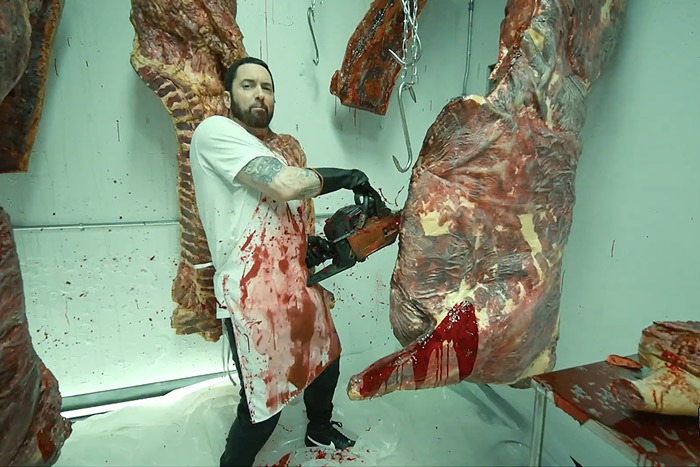 After dropping a teaser last week, Eminem unleashes the monster video for “Godzilla.”

The explosive clip, directed by Cole Bennett, finds Marshall Mathers roaming the aisles of a department store with godzillas. In between breathing fire and blasting a bazooka, he gets drunk off cognac and free liquor samples before puking up Legos.

Slim Shady wields a bloody chainsaw while butchering meat (and an ear), and stands on top of a pile of his own CDs. He makes his way outside to the parking lot before being knocked out by Mike Tyson himself. In the final scene, he is rushed to the hospital where he is examined by Dr. Dre.

The song, which appears on Em’s No. 1 album Music to Be Murdered By, features Juice WRLD. During an interview with Kxng Crooked for his “Crooked Corner” series, Em spoke about his late collaborator, who died from an accidental overdose in December. “That kid was so talented, like his freestyle he did on Tim Westwood — what the fuck?” said Em. “To be so young, he mastered that so fucking quickly. His potential was so off the charts.”